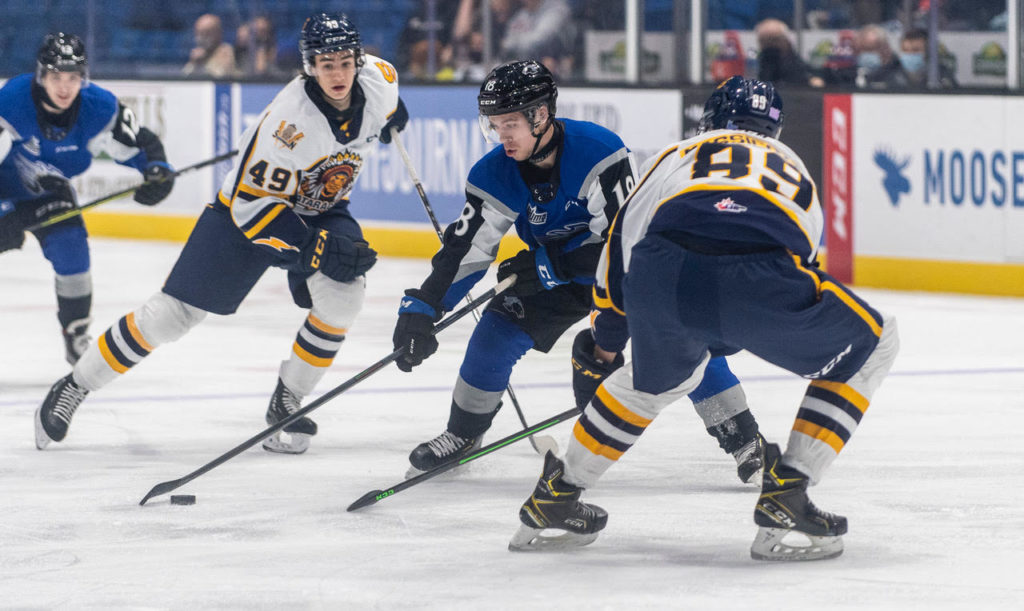 The Saint John Sea Dogs (8-6-0-2) beat the Shawinigan Cataractes (10-4-0-2) 6-3 at TD Station on Friday night. A goal-filled first period, with goals from Brady Burns, William Dufour, and Ryan Francis, and a period filled third, where the Sea Dogs held the top power play in the league to one goal highlighted the exciting game, along with rookie defenceman’s first QMJHL in the second.

Jonathan Lemieux started in net making 30 saves on 33 shots. Antoine Coulombe started in net, allowing 4 goals on 13 shots before being replaced by Charles-Antoine Lavallee who made 14 saves on 15 shots. 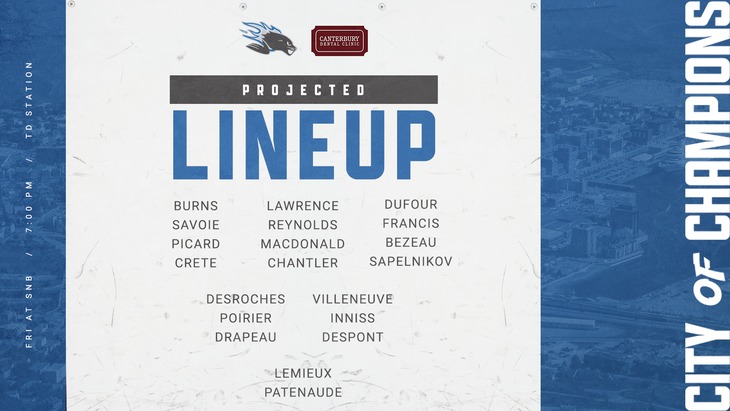 Brady Burns struck first, only 33 seconds into the game, rushing into the zone and picking up a pass from Josh Lawrence to take an early lead.

The top line struck again three minutes later, this time it was William Dufour who hit the back of the net, firing a wrist shot past a defenseman and the netminder.

Charlie DesRoches was sent off for interference at 8:52. The Cataractes scored on their resulting power play, getting within one.

Ryan Francis scored 6 seconds into a power play after Owen Saye was sent off. Ripping a shot top corner past a screening defenseman.

Riley Bezeau and Charles Beaudoin dropped the gloves for a lengthy fight. Beaudoin received five minutes and a misconduct for fighting. Bezeau received the same, but had an additional misconduct for not wearing a tied down sweater.

Shots after the first period were tied at 8.

Saint John took a 4-1 lead with Dufour’s second goal of the night, when he picked up a net front pass from William Villeneuve and slammed it five hole at 5:44. Cataractes goaltender Antoine Coulombe was pulled and replaced with Charles-Antoine Lavallee after the goal.

The Cataractes got one back quickly, Xavier Bourgeault scoring his second of the night.

Nathan Drapeau brought the lead to 5-2 with his first goal in the QMJHL. The 16 year old defenceman sniped the top corner from the face off circle at 11:58.

Olivier Picard and Martin Has got into a scrap behind the Shawinigan net, and were both sent off for cross-checking. Play went to 4-on-4 for two minutes. The penalties were killed, but the tension continued rising, and it wasn’t long before Picard and Zachary Massicote were sent to the box and play returned to 4-on-4 to begin the third period.

Shots after the second were 22-18 for Shawinigan.

Both teams traded penalties for the beginning of the third. Martin Has was sent off for cross-checking at 3:44. Charles Savoie was sent to the box for slashing at 5:58. Charles Beaudoin was called for tripping at 7:57. With 1:09 left in that power play, Cam MacDonald was sent off for interference.

30 seconds later, Ryan Francis joined him in the box, receiving two minutes for tripping and an additional two for unsportsmanlike conduct.

When all these penalties were over, there were six and a half minutes left and the score remained the same as it was when the period began, 5-2 for the Sea Dogs.

With 2:34 remaining, Jeremie Poirier was sent off for two minutes for boarding. The Cataractes pulled their netminder on the power play and scored their third goal of the night.

Shawinigan pulled their goalie again to try to score, but this time the Sea Dogs hit the netting. Keeping pressure in the Cataractes zone, Josh Lawrence scored and made it 6-3 and secured the win.

Final shots were 33-30 for Shawinigan.

The Sea Dogs will be back in action tomorrow night, taking on the Chicoutimi Sagueneens for the first time this season. Head to TD Station to support Pink in the Rink and Hockey Fights Cancer. The Sea Dogs will be wearing special pink jerseys that will be raffled off during the game and we encourage fans to show support by wearing pink as well! Tickets are available at the TD Station Box Office and online. Puck drop is at 7 PM.