MENU
In response to the suspension of the season by the QMJHL, the Sea Dogs office will be closed until further notice. Please see the below announcement re: existing tickets and flex vouchers. Please hold on to any unused tickets. For questions/information please contact info@saintjohnseadogs.com We thank you for your patience and understanding as we continue to work through this.
February 9, 2020 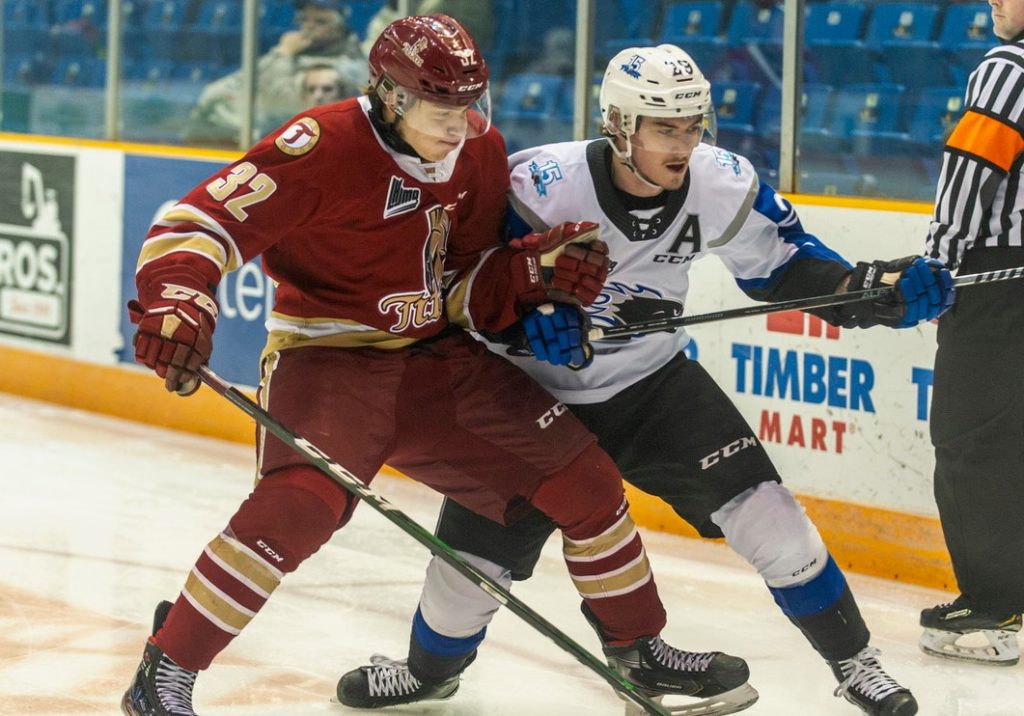 In their sixth meeting this season, the Saint John Sea Dogs (25-26-1-0) defeated the Acadie-Bathurst Titan (9-35-3-4) in a 7-5 win at TD Station. Jeffrey Durocher led the Sea Dogs with two goals and two assists in the high scoring affair on Sunday afternoon.

The starting goaltenders for the afternoon matchup were Zachary Bouthillier, who stopped 33 of the 38 shots he faced, for the Sea Dogs and Tristan Bérubé for the Titan.

Starting the game off right, Jeffrey Durocher picked up a bouncing rebound off an attempt by William Villeneuve and sent the puck to the back of the wide-open net 31 seconds into the game.

The rest of the period was filled with incredible saves by Zachary Bouthillier, keeping the Titan scoreless.

Ending the period how it started, Anderson MacDonald scored his second as a Sea Dog, sending a rebound from a Jeffrey Durocher attempt to the back of the net with only 43 seconds remaining in the period.

Shots after the first were 11-8 for the Titan.

The Sea Dogs were short handed after a high-sticking double minor to Dawson Stairs at 2:30. The penalty was killed successfully, and Stairs picked up a pass for a breakaway attempt as he left the box.  The attempt was stopped, but the offence was reinvigorated.

At 8:48, the Sea Dogs killed another penalty, when Josh Lawrence was sent off for interference. A shorthanded rush by Matt Gould and Jeffrey Durocher resulted in Durocher’s second goal of the night, picking the puck up in front of the Titan net and lifting it past the goaltender at 9:31.

The Sea Dogs got their first power play opportunity of the afternoon after Olivier Coulombe was sent off for hooking at 11:25. The Titan scored their first of the game shorthanded at 12:20.

Josh Lawrence scored just after the power play ended, tipping a shot from the point by Brady Burns.

A backhand shot by the Titan’s Mark Rumsey went past Bouthillier’s shoulder for their second goal of the night. 24 seconds later, Alexis Dubé made it 4-3 with a quick shot from in close.

William Villeneuve was sent to the box for cross-checking with 1:15 remaining in the period. The Titan tied the game six seconds into the power play.

Shots after the second period were 25-24 for the Titan.

A tip in by Julian Vander Voet gave the Sea Dogs the lead, 4:02 into the third period.

Brady Burns got his 25th goal of the season when he sent a shot through the traffic in front of the net and it bounced off of a Titan defenceman and into the net at 9:03.

Matt Gould and Noah Delemont were sent to the box at 11:51, Gould for roughing and Delemont for slashing, sending the play to four-on-four for two full minutes.

The Titan called a time out after a penalty to Ben Badalamenti for tripping at 15:24.

Bathurst pulled their goaltender with 1:22 remaining in the game. Josh Lawrence sent the puck into the open net, scoring the Sea Dogs seventh and final goal of the game, with 30 seconds remaining.

The Sea Dogs will hit the road to take on the Moncton Wildcats at the Avenir Centre on Wednesday, February 12. The two rivals are tied in their season series, with each team taking three wins in their six matchups so far.  Puck drop is at 7PM, follow the action as it happens at sjseadogs.com/live.