MENU
In response to the suspension of the season by the QMJHL, the Sea Dogs office will be closed until further notice. Please see the below announcement re: existing tickets and flex vouchers. Please hold on to any unused tickets. For questions/information please contact info@saintjohnseadogs.com We thank you for your patience and understanding as we continue to work through this.
June 27, 2019 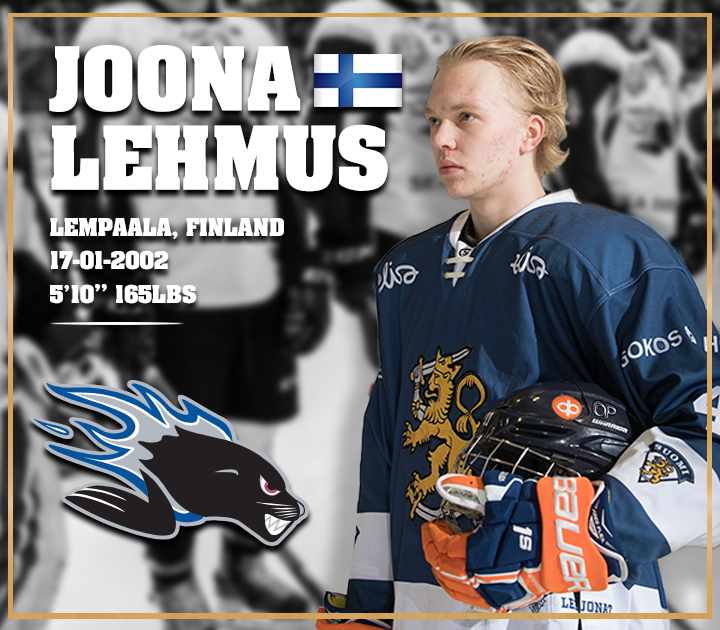 A native of Lempaala, Finland, Lehmus played the 2018-19 season with the Tappara U18 Program registering three goals and 17 assists in 20 games.

Sea Dogs Assistant General Manager & Head Scout Anthony Stella believes Joona’s skating and offence will be a huge asset to the Sea Dogs. “Joona has elite level skating and mobility combined with dynamic offensive ability. He plays the game with confidence and his style will fit in well with our D group.”

This will be Joona’s return to the Port City after visiting Saint John and Quispamsis during the 2018 World U-17 Hockey Challenge as part of Team Finland last November. Lehmus was a standout player on route to a silver medal finish for Team Finland.

“I am looking forward to playing in Saint John and improving my game while helping the team win,” said Joona. “I know the city a little from having played in the Under-17 Challenge last season. I think it’s a great hockey city.”

The Finnish defender will join returning Sea Dog and newly drafted Tampa Bay Lightning prospect Maxim Cajkovic as the second import player on this year’s roster. Last year’s 61st overall selection in the CHL Import Draft Filip Prikryl returned to his native Czech Republic in the off-season after signing with HC Plzen of the Czech Extraliga.

“We are pleased to welcome Joona back to Saint John,” said Sea Dogs President & General Manager Trevor Georgie. “He was here for the U17s last year and is very familiar with the city. We spoke to him this morning and he told us how excited he is to be a Sea Dog. He is looking forward to joining our young, talented group and meeting his teammates.”

Lehmus is only the second ever Finnish player to be drafted to the Sea Dogs following Oliver Felixson 25th overall in the 2015 CHL Import Draft.