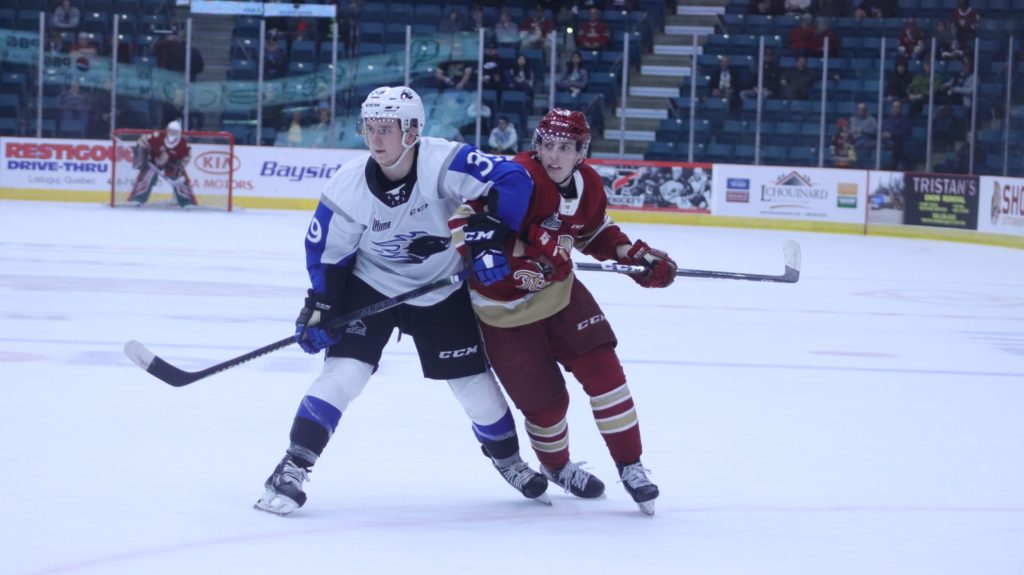 The Saint John Sea Dogs opened the 2020-21 Regular Season with a 4-3 overtime loss to the Acadie-Bathurst Titan on Friday night at the K.C. Irving Regional Centre. Jérémie Poirier led the offence for Saint John with two assists while Noah Patenaude made 42 saves.

Saint John struck first on a goal from Joshua Roy at 8:50 of the first. Roy found a loose puck in the slot and wired it past Chad Arsenault. Arsenault was acquired today from the Charlottetown Islanders as the Titan continue to wait for the arrival of highly touted European goaltender, Jan Bednar.

Saint John held the 1-0 lead through the first period before scoring quick back-to-back goals in the second. Kale McCallum let a shot fly from the point that hit a Titan defender in the chest before skittering past Arsenault for the 2-0 lead. Seconds later Alex Drover tipped in his first of the season to make it 3-0. Drover led all Sea Dogs in pre-season scoring with eight points.

The Titan stormed back in the third period. Mathieu Desgagnes and Cole Huckins scored back-to-back goals four minutes apart to cut the lead to 3-2. One minute later Desgagnés found the back of the net again to tie the game 3-3.

Josh Lawrence had a chance to recapture the lead when he was left alone in front late but Arsenault made the stop. Lawrence had a strong night in the face-off circle finishing 18/26.

In overtime the two teams exchanged end-to-end chances before Riley Kidney scored the game winner with 14 seconds left on the clock.

Both teams were held scoreless on the power play – the Titan 0/2 and the Sea Dogs 0/1.

Saint John will look to rebound Saturday night at home as they host the Charlottetown Islanders for their home opener at TD Station at 7pm. Tune into the game on Sea Dogs Radio Presented By TD on CFBC 930 AM or watch on Rogers TV.

A limited amount of single game tickets are available this season, more information can be found on our website.