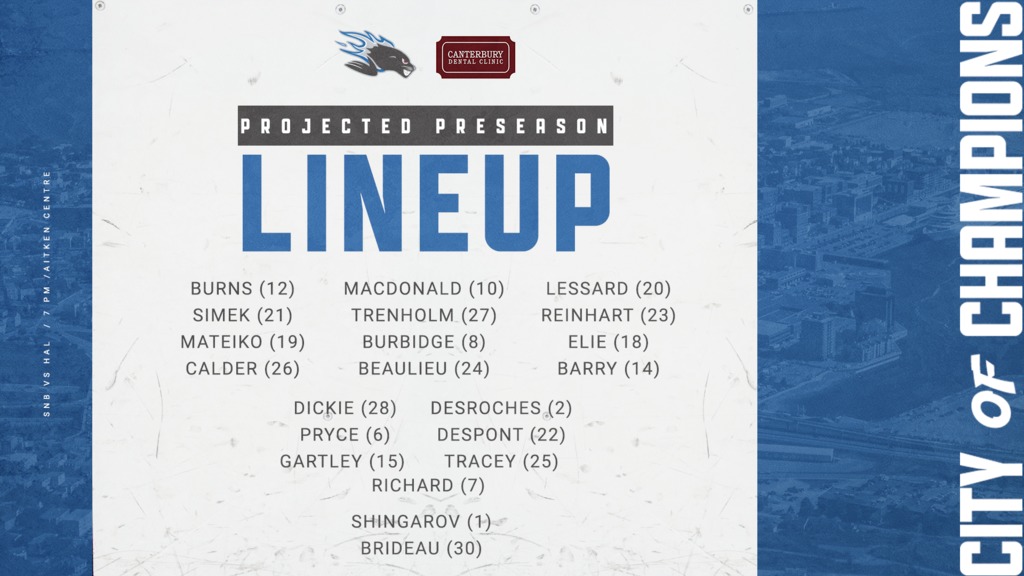 The Saint John Sea Dogs dropped their Friday night matchup against the Halifax Mooseheads 5-3. Playing in front of the crowd at the Aitken Centre in Fredericton, veterans Marshall Lessard and Connor Trenholm, as well as new Sea Dog Eriks Mateiko, scored their first goals of the preseason.

Ventsislav Shingarov started for the Sea Dogs, making 31 saves on 36 shots. Mathis Rousseau got the start for Halifax, stopping 31 of 34 Sea Dogs shots.

Pavel Simek was sent to the box with an early interference call, but the Sea Dogs were able to kill the penalty and keep the game scoreless.

Brody Fournier opened the scoring for Halifax with a goal at 12:01.

Halifax’s Cameron Whynot was sent off for high sticking late in the period to give the Sea Dogs their first power play of the night. Attilio Biasca hit the back of the net short handed and the Sea Dogs went into the second frame down 2-0.

Shots after the first were tied at 11.

The returning veterans connected on the first Sea Dogs goal of the night, when Marshall Lessard found the back of the net on the power play, with assists going to Brady Burns and Charlie DesRoches at 11:34.

Attilio Biasca scored his second of the game, a power play goal, two minutes later and the Sea Dogs trailed 3-1 going into the final period.

Shots after the second were 24-22 for Halifax.

James Swan scored 2:34 into the third to increase Halifax’s lead to 4-1, but less than a minute later, another Sea Dogs veteran, Connor Trenholm, scored and brought the Dogs within two once again.

Latvian and 2022 Import Draft pick for the Sea Dogs, Eriks Mateiko, scored his first goal of the preseason at 13:10 making it a 5-3 final score.

The Sea Dogs are back in action on Sunday at the Aitken Centre in Fredericton to host the Acadie-Bathurst Titan. Puck drop is at 3 PM, tickets are available at goredsgo.ca.