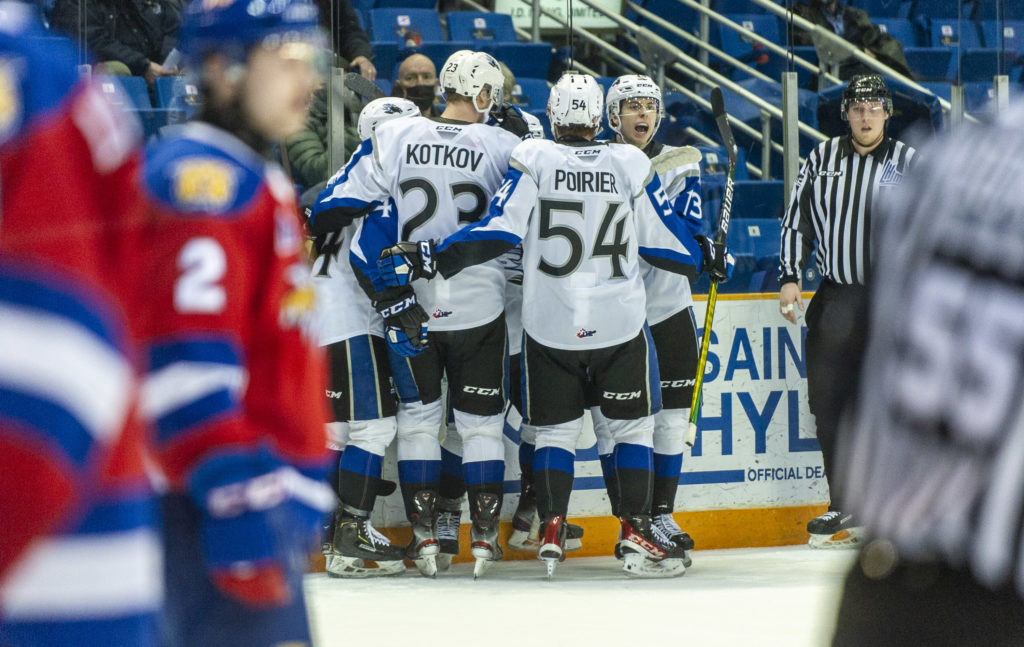 It took 67 minutes but the Saint John Sea Dogs (3-3) finished off the 2021 round-robin playoff tournament with a 6-5 win over the Moncton Wildcats (2-4) on Sunday night at the Avenir Centre. Cam MacDonald was the hero of the night scoring the overtime winner, ending the Sea Dogs’ season on a high note.

Zachary Emond made his sixth straight start for Saint John, and the last of his QMJHL career. In the Moncton net, Dakota-Lund Cornish also started the final game of his overage season. 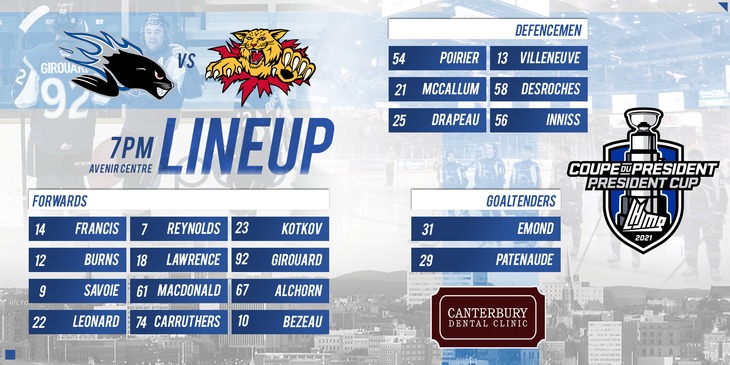 Saint John opened the game with three straight goals. William Villeneuve fired a hard wrister from the point for his first of the playoffs and the early Sea Dogs lead. One minute later Brady Burns toe dragged into the slot and beat Lund-Cornish low for his team leading fifth of the postseason. Not done there, Ryan Francis knocked in a rebound at the side of the net three minutes later for his fourth of the playoffs to make it 3-0.

Moncton wouldn’t roll over though as they stormed back with four unanswered goals including a pair of power play markers in the final five minutes of the first to lead 4-3.

The Wildcats held the lead until the midway point of the second period until Jéremie Poirier scored on the power play with a booming blast for his fourth of the postseason.

The tie was short lived as the Wildcats struck again, this time short handed as the puck squirted out of the zone and Gabriel Bernier broke away before beating Emond five hole to retake the lead for Moncton.

Under two minutes later the Sea Dogs replied when Riley Bezeau found Charles Savoie streaking towards the net and Savoie corralled the puck from a diving Lund-Cornish before roofing the puck to tie the game, 5-5.

The third period tightened up as neither team wanted to give an inch. Saint John held a 33-27 shot advantage through the first two periods but the two teams would only combine for 16 shots in the third. The Sea Dogs had the best opportunity of the third period with a late power play but Cam MacDonald was called for tripping just seconds into the man advantage. He would later redeem himself in a big way. The third period ended with 4-on-4 play and the game tied 5-5.

Leighton Carruthers had the first real chance of overtime, hitting the post on a rush with Liam Leonard. Moncton came rushing right back before hitting their own post seconds later. Vladislav Kotkov chased the rebound and exited the zone with speed but was hauled down from behind by Gabriel Bernier for the first (and only) penalty of the extra frame.

With one second left in the Bernier penalty, Jérémie Poirier let a shot go from the circle and Cam MacDonald was on the doorstep to knock in the rebound for his fourth of the playoffs giving the Sea Dogs the 6-5 overtime win.

Ryan Francis finished with a goal and two assists to secure top spot in points for the team during the postseason with 10. Reynolds and McCallum each had two assists while Burns’ goal gave him the team lead for playoff scoring with five.

The two squads shared a handshake line post game. It was a welcome gesture following a hard fought 16 games between the two teams this season. As is tradition, Moncton awarded their three graduating 20-year-old players with the 3 Stars of the game.

The Acadie-Bathurst Titan were crowned victors of the Maritimes Division round-robin playoff on Saturday night following a 5-4 double overtime win over the Moncton Wildcats. The Titan will now face the Charlottetown Islanders in the Martimes Divison finals with the winner travelling to Quebec for the league semi-finals.

The Sea Dogs will now set their eyes on the 2021 QMJHL Draft scheduled for late June. We’ll see everyone at TD Station for the 2021-22 Season!