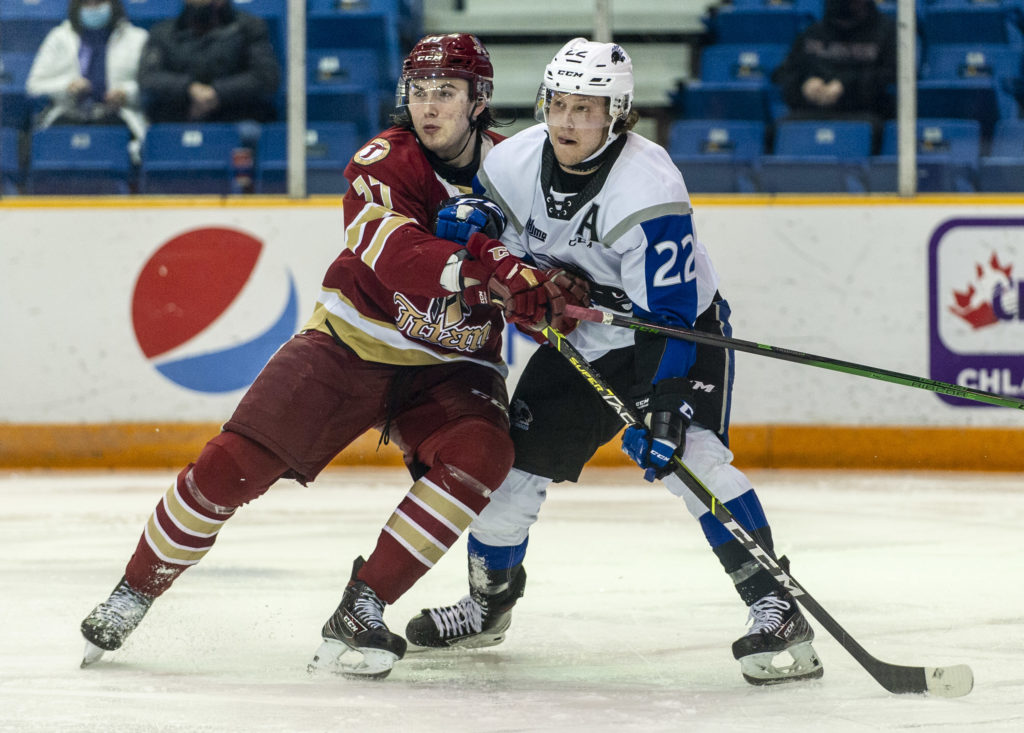 The Saint John Sea Dogs (2-3) fought back from a 3-0 third period deficit on Friday night against the Acadie-Bathurst Titan (3-2) to force overtime, but it was Jaxon Bellamy playing the hero as he scored the overtime winner to give the Titan a crucial third playoff win.

Zachary Emond was sensational in net for the Sea Dogs stopping 38 shots while Jan Bednar was equally as impressive for the Titan stopping 41. This was Bednar’s first start against Saint John this postseason after the Sea Dogs shelled Chad Arsenault for 11 goals in his previous two outings.

Head Coach Greg Gilbert returned to the same lineup from Sunday’s 6-2 win over the Titan at TD Station. 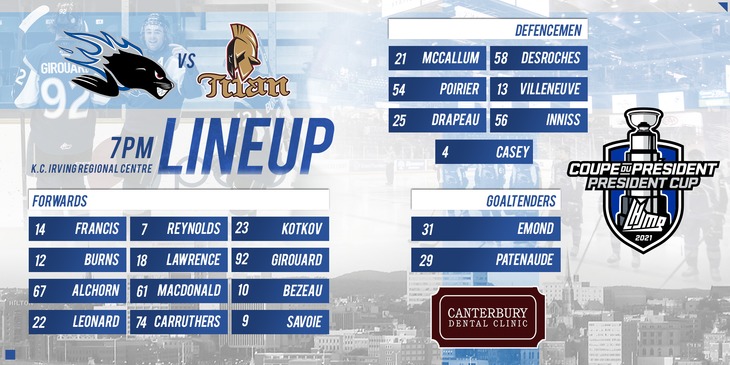 Both teams showed some nervous energy to start the game as the two teams vied for the all important third win in this round-robin playoff tournament. Saint John led in shots for most of the period thanks to an early power play opportunity after Riley Kidney was called for checking from behind just 1:42 into the game.

The puck stayed out of both nets until eight seconds to go in the period as the Sea Dogs were in the dying seconds of a penalty kill. The Titan launched a shot that ricocheted off Emond and hit the glass before bouncing back to the crease leaving an open net for Ben Allison who gave the Titan their first lead of the game.

The second period saw a sluggish start from both sides before the tempo was cranked up to a fever pitch. Zachary Emond made a toe save to rob Logan Chisholm at the doorstep and it was back and forth for the next five minutes. The play resembled 3-on-3 overtime at times, foreshadowing what was to come.

Bennett MacArthur broke the back-and-forth when he snuck in alone and buried it to give the Titan a 2-0 lead at 11:52.

At 18:22 Jacob Melanson dumped Charles Savoie into the boards at the Titan bench which prompted a scrum. Melanson would receive a five minute major for boarding while Kale McCallum received two minutes for roughing. During the 4-on-4 with 38 seconds to play in the period, Riley Kidney scored unassisted to make it 3-0 Titan. The Sea Dogs fired 26 shots through the first 40 minutes but couldn’t solve Bednar.

Saint John started the third with the remainder of the Melanson penalty but couldn’t get the offence to click. Finally, after the penalty had expired, Ryan Francis kicked-off the comeback with his second of the playoffs, tapping in a rebound at the side of the goal.

The Sea Dogs continued to pressure and struck again, this time off the face-off when Brady Burns stepped into the slot and wired the puck past Bednar to make it 3-2 with five minutes to play in the game.

30 seconds after the Burns goal, Jaxon Bellamy rode Nicholas Girouard face first into the boards behind the Titan goal and received a four-minute checking from behind penalty. Girouard was slow to get up but stayed in the game.

During the ensuing power play Ryan Francis found twine again in similar fashion to his first goal of the night, knocking home a rebound off a heavy shot from Charlie DesRoches to tie the game.

With three seconds left in the Bellamy penalty, Jérémie Poirier was forced to draw an interference call to save a 2-on-1 and the Titan ended the third period on a power play. Emond again came up huge for the Sea Dogs, sending the game to overtime.

Just past the midway point of the first overtime, Cam MacDonald collided with Mathieu Desgagnes in a knee-on-knee and MacDonald would receive a five minute major for kneeing and a game misconduct.

1:27 into the penalty Jaxon Bellamy released a slapshot from the point that beat Emond to end the game, 4-3 the final.

Ryan Francis finished with two goals, while fellow Flames prospect Jérémie Poirier had two assists. The pair are tied for the team lead in playoff points with seven.

Saint John will now wait for the results of the Moncton/Acadie-Bathurst game tomorrow night in Bathurst. The Sea Dogs need the Wildcats to win to keep their playoff hopes alive. Saint John and Moncton square off on Sunday night in Moncton at 7PM in the final game of the round-robin playoff tournament. Fans can listen to the game on Sea Dogs Radio Presented By TD on CFBC 930AM. The game will also be broadcast on Rogers TV.