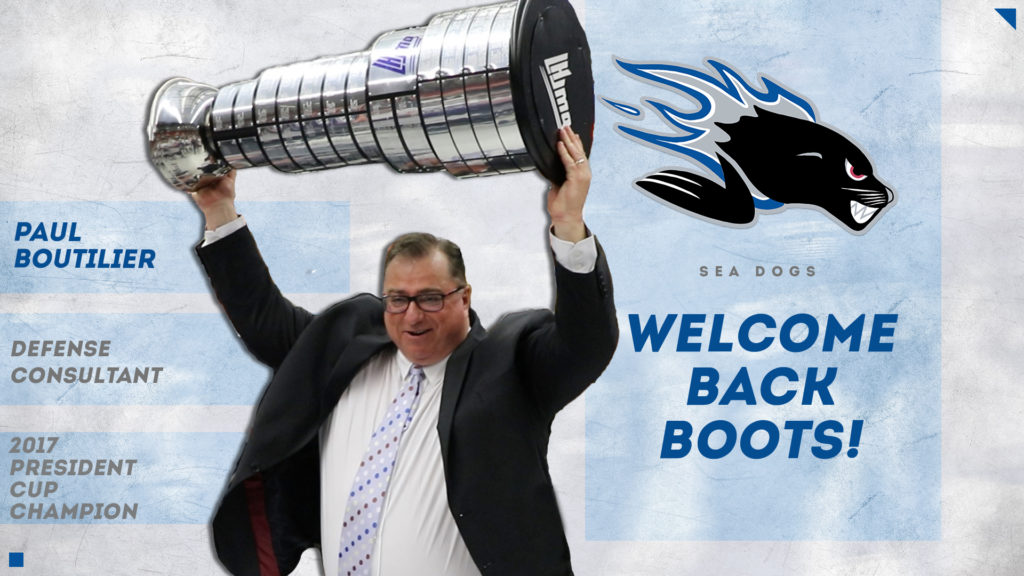 The Saint John Sea Dogs are pleased to announce the hiring of Paul Boutilier as Defense Consultant for the 2021-2022 season.

Boutilier returns to the Sea Dogs after winning a President Cup with the team in 2017, as assistant coach. That team allowed the lowest goals against (31) and shots against (405) during the playoffs in QMJHL history (1970-2021).

“We are thrilled to welcome ‘Boots’ back to the Sea Dogs” said Sea Dogs President & General Manager, Trevor Georgie. “He is an expert at teaching the position, and was an integral part of our 2017 team when we last went to the Memorial Cup. His passion, ideas, and overall way he sees the game adds another dimension to our group and will be valuable to our D core.”

“To add the Saint John Sea Dogs to my client list feels great” said Boutilier. “Looking forward to working with Gord Dwyer, his coaching staff, and the contingent of defensemen Trevor Georgie has assembled. I strongly believe individuals can be taught and mentored to play ‘defence to win’ and develop into a group hard to generate offensive on. It is a responsibility that I welcome.”

Boutilier has a long and distinguished career in the hockey world as a player and coach, including being a member of the 1983 Stanley Cup champion New York Islanders and a gold medal winner at the 1982 World Junior Hockey Championships.

“It is great to add Paul to our Sea Dogs staff” said Head Coach, Gordie Dwyer. “His experience will help drive our defencemen’s development and performance this season.”

Boutilier also served as Head Coach for Team Canada at the Under-17 championships in 2017, winning a silver medal. In 2013-14 he worked in defence development for the Nashville Predators defence prospects.