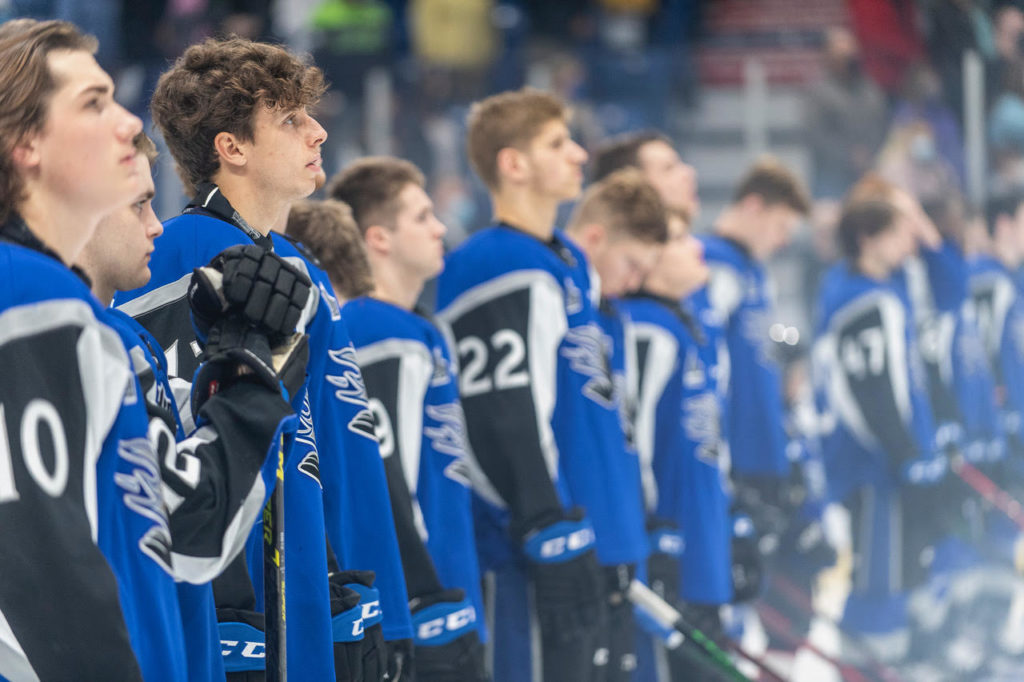 The Saint John Sea Dogs fell 4-2 to the Charlottetown Islanders in their home opener at TD Station on Friday night. Two quick goals from the Islanders in the first period were too much for the Sea Dogs to overcome despite a late game push including goals from Josh Lawrence and Brady Burns.

Before the action, all the Sea Dogs were brought out onto the ice, introducing fans to the 2021-22 roster. Fans were then treated to a sneak peak of never before seen footage from the Memorial Cup bid video that was submitted this summer. The opening ceremonies were then completed when President and General Manager of the Sea Dogs Trevor Georgie, Chair of the Memorial Cup Bid Committee Mark-Anthony Ashfield, and Memorial Cup Champion and former Sea Dogs captain Mike Thomas came to centre ice to drop the puck.

The Islanders struck first, with two goals from William Trudeau and Noah Laaouan early in the first.

Shots after the first period were 13-10 for Saint John.

8:29 into the second frame, the Islanders made it a 3-0 lead off a goal from Brett Budgell.

Josh Lawrence got the crowd going at 11:13 in the second period. Sneaking behind the Islanders defense and picking up a pass from William Dufour in front of Charlottetown’s net, Lawrence roofed it for the Sea Dogs first goal of the 2021-22 season.

The period went on with increasing intensity and shoving at the whistles, culminating in a scrum that saw Sea Dog Olivier Picard sent off for two minutes for and the Islanders Ben Boyd sent off for four minutes for roughing.

Shots after the second period were 22-20 for Saint John.

Brady Burns brought the score within one with a snipe of a shot after intercepting a pass in front of the Islanders net, his second point of the night.

It looked like the Sea Dogs had tied the game up, but the goal was waved off after Cole Foston was sent to the box for tripping on the play.

The Sea Dogs called a time out to regroup in the final minutes of the game and returned to play having pulled Lemieux to add an extra attacker. The Islanders put the final nail in the coffin with 53 seconds remaining scoring an empty net goal.

Final shots were tied at 29.

The Sea Dogs are back in action tomorrow night, October 2nd, as they take on the Islanders once again, this time in Charlottetown, at 7 PM. Listen to the game live on Sea Dogs Radio Presented By TD on CFBC 930AM.