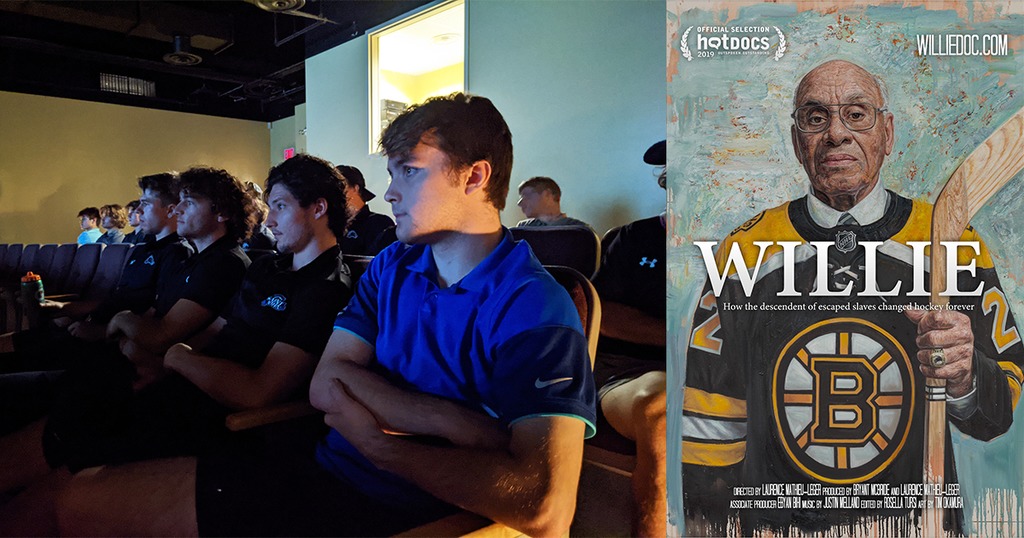 Players and staff of the Saint John Sea Dogs visited the New Brunswick Museum this past week for a private screening of the documentary ‘Willie’, a film covering the life of New Brunswick native Willie O’Ree, the first black player to play in the NHL. Following the screening of the film, players participated in a Q&A session with Bryant McBride, a friend of O’Ree and producer on the film.

The screening of the film is part of a series of off-ice events the players are participating in during training camp to enrich and inform their perspectives away from hockey.

Born in Fredericton, NB, O’Ree played 45 games with the Boston Bruins of the NHL and was inducted into the Hockey Hall of Fame in 2018 in the builders category for his contributions to hockey during his pro-career and his continuing mentorship of youth in hockey.

“It was an excellent opportunity for our group to familiarize themselves with one of New Brunswick’s greatest citizens and hockey heroes, Willie O’Ree,” said Sea Dogs Head Coach, Gordie Dwyer. “Willie has inspired hockey players for generations and his story continues to impact the game at the greatest levels. Breaking the colour barrier in 1958 and his continued work to grow the game and erase racism was a powerful message for our players. The film has empowered our players to use their influence to continue to grow the game and make hockey more inclusive for everyone.”

Sea Dogs defenceman, Chris Inniss reflected upon his own experiences in hockey.

“For me an event like today is great, because we all go through our own challenges and experiences. I don’t think for example, that my teammates would ever think that I’ve been through similar things. They wouldn’t necessarily think that things portrayed in the movie still go on in hockey today or have happened as often as they have to me. It opens up eyes, and participating in events like this might help the person after me, to not have to go through similar experiences. It’s a good eye opener about how far we have come, but there is still a lot of work that needs to be done.”

After the film. Producer Bryant McBride participated in a virtual Q&A with Team President & General Manager Trevor Georgie. McBride was candid and left all in the room with important insights, including the role that teams and players can play in creating an inclusive hockey environment.

“The fact that the Sea Dogs took time as an organization to view the film and discuss these tough issues speaks volumes about who they are,” said McBride.

Later this week the team will be meeting with Brock Mcgillis, an ambassador for the You Can Play Project which works to ensure the safety and inclusion for all who participate in sports, including LGBTQ+ athletes, coaches and fans. On Wednesday the team will be participating in a training session with members of the Saint John Fire Department.

The Willie O’Ree documentary ‘Willie’ is available for streaming in Canada via TSN and Crave. To learn more visit www.williedoc.com.