MENU
In response to the suspension of the season by the QMJHL, the Sea Dogs office will be closed until further notice. Please see the below announcement re: existing tickets and flex vouchers. Please hold on to any unused tickets. For questions/information please contact info@saintjohnseadogs.com We thank you for your patience and understanding as we continue to work through this.
June 26, 2019 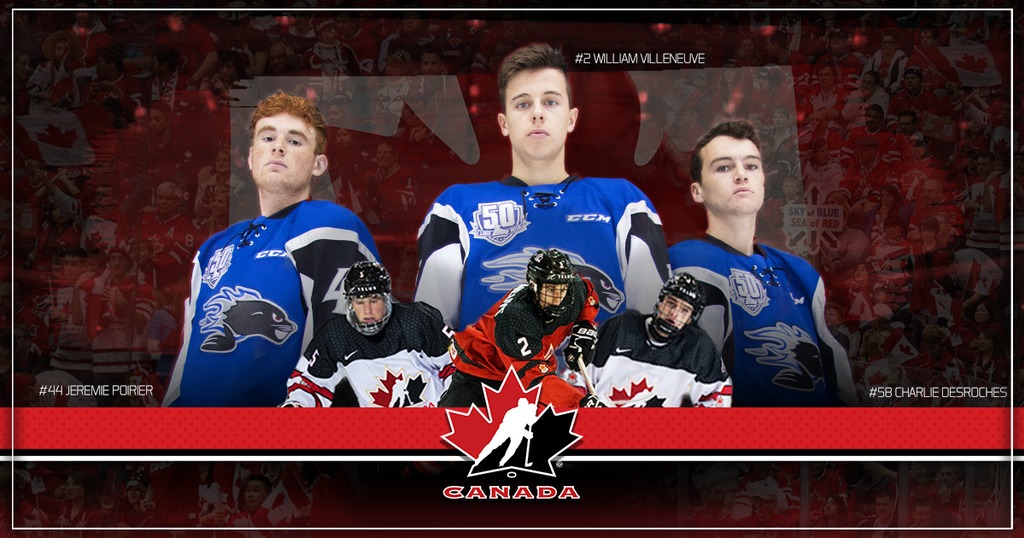 12 Sea Dogs from the 2002-03 age group will have attended Hockey Canada Development Camps.

CALGARY – The Saint John Sea Dogs will be well represented this summer at Hockey Canada Development Camps for this year’s Hlinka Gretzky Cup and the World U-17 Hockey Challenge.

Charlie DesRoches, Jeremie Poirier and William Villeneuve are among 44 players who will attend selection camp for Canada’s National Men’s Summer Under-18 Team in Calgary for the Hlinka Gretzky Cup. The three invites from one team is tied for the most in the CHL with Prince Albert (WHL).

The Sea Dogs young defence core had an excellent rookie season logging big minutes and combining for 67 points. The trio all finished in the top 5 for QMJHL scoring by a 2002 born defenceman.

Sea Dogs President & General Manager Trevor Georgie is thrilled with the recognition this group has earned.

“Three of four QMJHL defencemen invited are Sea Dogs and that is an impressive feat. We are exceptionally proud of Will, Jeremie, and Charlie on getting this invitation. The three of them deserve it. All of us here have really enjoyed watching them become great teammates and great friends. The best part is, they are all unique and compliment each other. They push each other to get better and they support each other. It’s special to watch.”

The Hlinka Gretzky Cup is being held August 5th – 10th in the Czech Republic and Slovakia.

Following in the footsteps of last year’s Sea Dogs World U-17 stars are a crop of newly drafted Sea Dogs who will be attending World U-17 National Development Camp in Calgary in July.

Anthony Cliche, Cam MacDonald, Peter Reynolds, Joshua Roy and Charles Savoie are among 112 invitees to Hockey Canada’s camp taking place July 19-26th. Following camp, players will be monitored through the early weeks of the 2019-20 season before 66 are named to one of three Canadian teams – Team Canada Black, Team Canada Red and Team Canada White – competing at the 2019 World Under-17 Hockey Challenge, scheduled for Nov. 2-9 in Medicine Hat, Alta., and Swift Current, Sask.

The five Sea Dogs chosen for camp is tied with Québec for the most representatives from one team in the CHL. Combine this number with the seven that attended last year’s camp and Saint John has seen 12 of its 2002-2003 born players attend Hockey Canada’s National Under-17 Development Camp–the most of any team in the CHL.

“It’s a testament to all the hard work our players have put in to this point and the sacrifices that not only them, but their families have made. It’s also a testament to our scouting staff and coaching staff for their work identifying these talented young men, recruiting them, and committing to their development. We have our Sea Dogs blueprint that we will continue to follow with this young core, and will continue to trust the process.”

A full list of invitees to the 2019 National Under-17 Development Camp is available here.