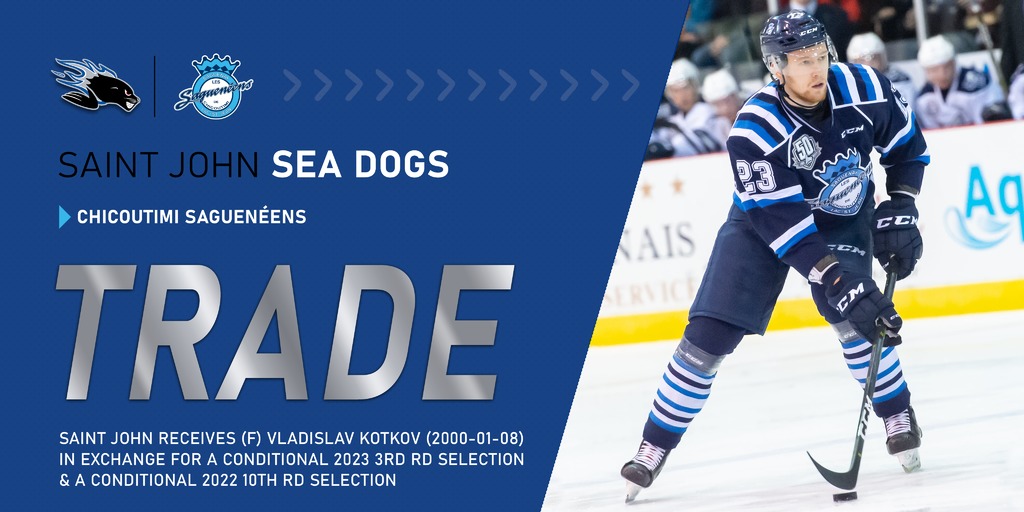 Kotkov, a 6”4 right winger, has spent his entire QMJHL career with the Saguenéens where he registered 77 goals and 156 points in 177 regular season games.

“We wanted to augment our group, specifically our right side, with experience, size, and scoring,” said Sea Dogs President & General Manager Trevor Georgie. “Kotkov is an elite offensive weapon and has pro hockey camp and playing experience. We think that he has the chance to be a very dominant player this season.”

A dangerous scorer, Kotkov signed an entry-level contract with San Jose in July 2018 and scored for the San Jose Barracudas in his first and only American Hockey League (AHL) game. He also has 10 games of QMJHL playoff experience, registering a total of 5 points.

“He has been in the playoffs every season since he joined the League,” said Georgie. “Last season, he was an important part of a team that finished third in the overall standings and was poised for a run at the President Cup. If it wasn’t for the sudden cancellation of the season, his playoff totals would be much higher.”

“We’ve been judicious about managing our assets and wanted to leave ourselves some flexibility going into the season, so that at the right time, we could add the right piece at the right price. We feel that we accomplished that here. You need four significant lines to win and Kotkov is another important piece to our puzzle.”