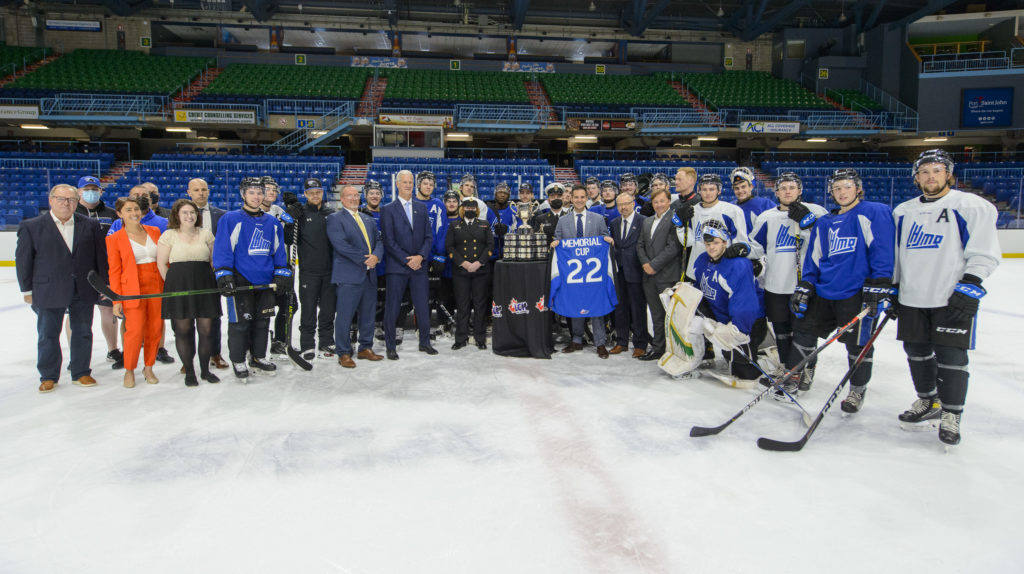 It has been a BIG week for the Sea Dogs, here’s a roundup of all the excitement!

Saint John named the Host City for the 2022 Memorial Cup

On Wednesday, the President of the Canadian Hockey League Dan Mackenzie surprised the whole team by arriving in Saint John to announce in person that the Saint John Sea Dogs would be hosting the 2022 Memorial Cup presented by Kia.

Once the front office was informed, they made their way to the ice to interrupt practice with the good news.

Watch as the President of the CHL Dan MacKenzie and @KiaCanada surprise the @SJSeaDogs to let them know that they will host the 2022 Memorial Cup. #OneForAll | #UnPourTous pic.twitter.com/R2wgLcKWsP

After the organization found out, it was time to share with everyone else and the CHL held a press conference at ice level to make the announcement publicly and take questions from the media. The press conference is available in full on our Facebook page here.

Sapelnikov arrives in Saint John
This summer the Sea Dogs selected Evgeny Sapelnikov with the 82nd selection in the 2021 CHL Import Draft and this week he arrived in Saint John to join the team.

Read our writeup on the Import Draft here.

End of the pre-season

The Sea Dogs ended their pre-season with an intense win against the Mooseheads in Halifax. Both goaltenders put up strong performances, sending the game to a shootout. Goals from William Dufour, Cole Foston, and the shootout winner from Riley Bezeau got Saint John the 3-2 win.

To close out a great week for the Sea Dogs, Jeremie Poirier and William Villeneuve signed their first NHL contracts. Both defensemen were selected in the 2020 NHL draft and have been attending their respective teams training camps this month.

Poirier was drafted by the Calgary Flames in the third round, 72nd overall. Read about the signing on the Flames website below.

The #Flames have signed defenceman Jeremie Poirier to an entry-level contract: https://t.co/PnTEYw7wbQ pic.twitter.com/vT6RJwgA43

Villeneuve was drafted in the fourth round by the Toronto Maple Leafs. Read about the signing on the Leafs website below.