MENU
In response to the suspension of the season by the QMJHL, the Sea Dogs office will be closed until further notice. Please see the below announcement re: existing tickets and flex vouchers. Please hold on to any unused tickets. For questions/information please contact info@saintjohnseadogs.com We thank you for your patience and understanding as we continue to work through this.
December 22, 2010 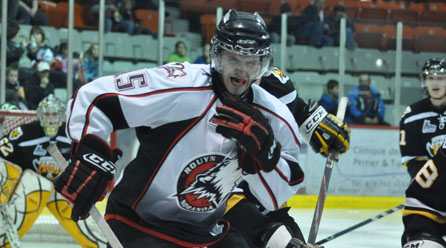 SAINT JOHN – The Saint John Sea Dogs have added toughness and grit to their lineup as they gear up for the 2011 President`s Cup playoff run.

The Sea Dogs made their first move of the 2010-11 Quebec Major Junior Hockey League Christmas trade period, acquiring six-foot-three, 196-pound forward Alexandre Beauregard from the Rouyn-Noranda Huskies for a first-round pick in the 2011 QMJHL entry draft.

The 19-year-old from St-Jerome, Que., was in his third season with Rouyn-Noranda. He had four goals and 10 points to go along with 80 penalty minutes in 35 games for the last-place Huskies this year. Last season he totalled eight goals and 24 points in 65 games, and added 88 penalty minutes.

“He’s the type of player that we were looking for: A player with a big, physical presence, who can play all three forward positions,” said Sea Dogs director of hockey operations Mike Kelly.

Beauregard also brings 17 games of QMJHL playoff experience with him from two playoff runs in Rouyn-Noranda. Kelly expects the versatile veteran to contribute in a variety of ways.

“This is the type of player that you need heading into the playoffs,” Kelly said. “He can move up into the lineup, he can kill penalties, and he gives us an option as an overage player next year.”

The Sea Dogs sit first overall in the QMJHL and No. 1 in the Canadian Hockey League national rankings with a record of 29-4-0-2.

After a well-deserved Christmas break, the Sea Dogs take to the ice again Dec. 28 on the road against the Prince Edward Island Rocket, and Dec. 30 against the Acadie-Bathurst Titan. Tune in to News 88.9 FM for Tim Roszell’s live broadcast, or stream the action online via the official TELUS QMJHL webcast (click HERE to order; charges apply).

The Sea Dogs resume their home schedule with a New Year’s Eve date against the rival Moncton Wildcats, a 7:30 p.m. start Dec. 31 at Harbour Station. All upper bowl tickets are just $10, and can be obtained by calling the Harbour Station box office at (506) 657-1234, or by visiting www.tickets.harbourstation.ca.