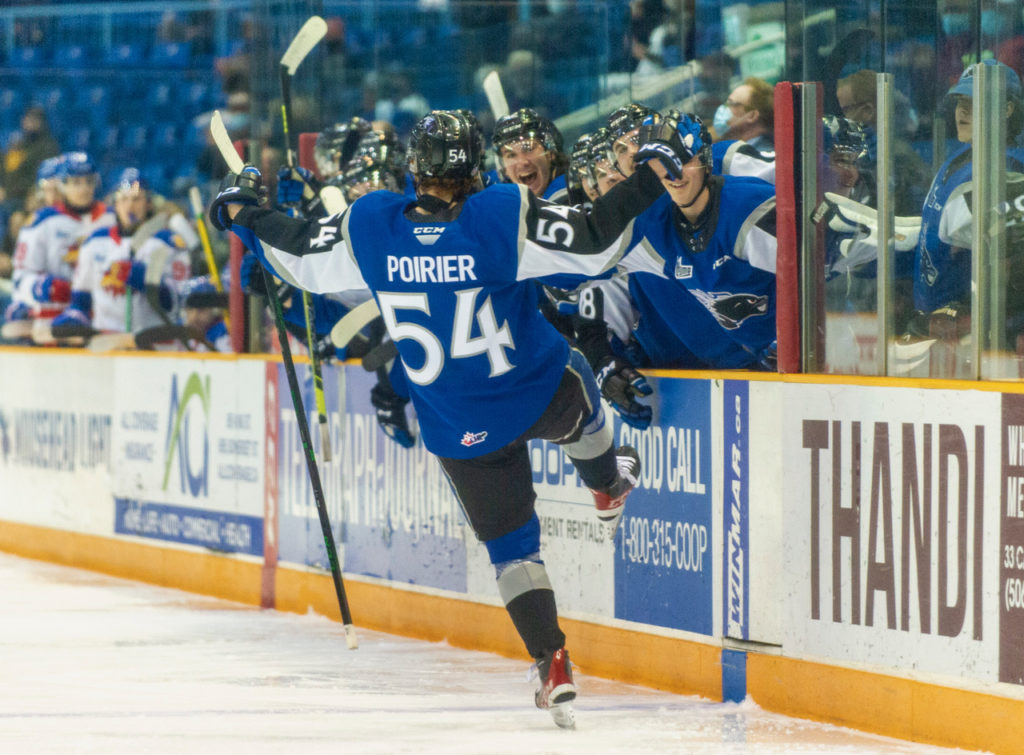 A three-goal second period propelled the Saint John Sea Dogs past the Moncton Wildcats in their first meeting of the post-season on Tuesday. The port city team celebrated the return of playoff hockey to TD Station and kicked off the nine-game round robin with an exciting and explosive matchup against their maritime rivals. Goals from Jérémie Poirier, Brady Burns, and Leighton Carruthers in the second frame, along with big plays from the penalty kill at key moments, led the way for the 6-2 win on Tuesday night.

Zachary Emond backstopped his team to the win, stopping 22 of 24 shots. Rookie netminder Vincent Fillion was at the other end of the ice, stopping 27 of the Sea Dogs 33 shots. 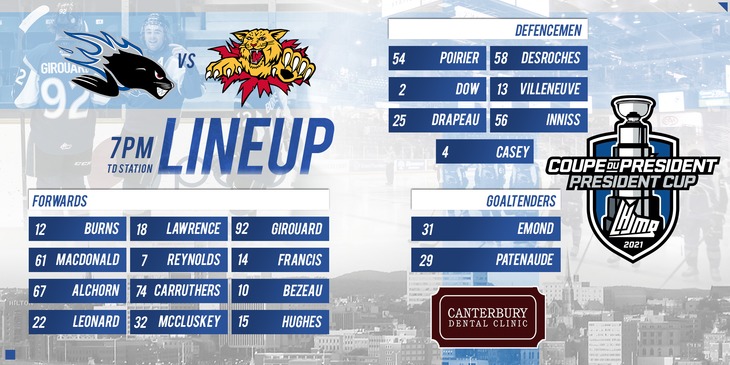 The Sea Dogs kicked off the first playoff game in TD Station in four years strong, keeping the pressure on the Wildcats the whole first period and creating scoring opportunities with their passing plays. This pressure paid off when the Sea Dogs got on the board first. Josh Lawrence stole the puck behind the Wildcats net and slid it to Nicholas Girouard who made no mistake tapping it into the far corner of the net at 14:44.

The Wildcats thought they scored with a sharp angle shot from Francis Langlois with 4:04 remaining in the first, but it was waved off as the net was knocked out of place. The shot went to a review and was deemed a good goal, tying up the game at one.

Shots after the first were 14-7 for Saint John.

After a penalty-free first period for both sides, the intensity increased and early in the second period a scrum broke out at the Wildcats net. Leighton Carruthers and Anthony Hamel were sent off for roughing and play went to 4-on-4. Saint John capitalized on that 33 seconds later when Jérémie Poirier broke into the Wildcats zone and ripped a shot past the defencemen and into the back of the net.

Cam MacDonald was sent off for hooking with 16 seconds remaining in the 4-on-4. Jacob Hudson scored on the resulting Wildcats power play with a slap shot from the top of the circle, tying the game at two.

Nathan Casey was sent off for tripping, giving the Sea Dogs their first power play of the night and Saint John’s leading goal scorer from the regular season Brady Burns gave his team the lead with his first of the post-season. A passing play by the power play unit opened up the space for Burns to receive a pass from Ryan Francis and fire a one timer past Vincent Fillion at 9:37.

That goal was followed quickly by a breakaway goal from Leighton Carruthers, outskating the defenceman and out deke-ing the goaltender to put the Sea Dogs up 4-2.

Shots after the second were 24-16 for Saint John.

Jacob Hudson was sent off for roughing early in the third and the Sea Dogs scored just as the penalty ended. Peter Reynolds increased the lead to 3 at 3:54 with a well-placed tip of a pass from Jérémie Poirier in front of the net.

The Sea Dogs maintained their lead through two back-to-back penalty kills, Zachary Alchorn for slashing at 4:34 and Cam MacDonald for delay of game 1:56 later.

With 3:21 remaining in the game, a high shot bounced off the glass and Riley Bezeau swatted into the net as it fell, making it 6-2. The intensity of the game boiled over once again and another scrum broke out, this time one that sent gloves and helmets flying. Penalties were handed out on both sides, the balance of which resulted in a Sea Dogs power play for the remainder of the game.

The Sea Dogs won’t get a long break before they head to Bathurst to take on the Titan for their next round robin game on Thursday April 22 at 7PM.