MENU
In response to the suspension of the season by the QMJHL, the Sea Dogs office will be closed until further notice. Please see the below announcement re: existing tickets and flex vouchers. Please hold on to any unused tickets. For questions/information please contact info@saintjohnseadogs.com We thank you for your patience and understanding as we continue to work through this.
October 18, 2019 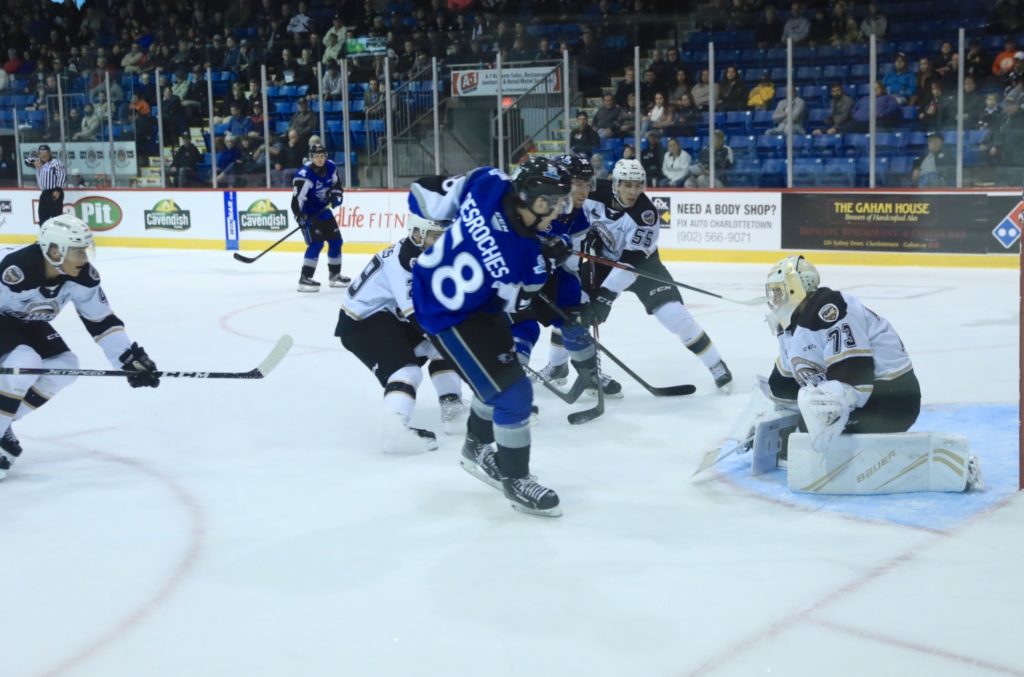 Both teams started their rookie goaltenders in the first game of a home-and-home. Saint John’s Noah Patenaude was searching for his first win as a Sea Dog while Jacob Goobie got the start for Charlottetown.

New Brunswick native Lukas Cormier opened the scoring at 11:33 of the first. Cormier and Sea Dog Jérémie Poirier were both named to Team QMJHL this week and will play together November 4th and 5th in the CIBC Canada Russia Series taking place in Saint John and Moncton.

Not to be outdone by his soon to be teammate, Jérémie Poirier scored at 16:02 to cut the lead to one. DesRoches and Lawrence had the assists.

With under two minutes in the period Liam Peyton was called for a kneeing major and received a game misconduct. This also resulted in a fighting major with Jordan Spadafore.

Shots in the period were 11 a piece.

Overager Kevin Gursoy scored two goals in the second period to extend the lead for the Islanders, 4-1.

Josh Lawrence replied for the Sea Dogs by jamming a loose puck in past Jacob Goobie, his second of the season.

The Islanders came right back when Brett Budgell scored an unassisted goal after the puck was redirected in front off William Villeneuve. 5-2 Charlottetown.

The Islanders took a 21-19 shot lead into the third.

And then it was all Sea Dogs.

Deakin-Poot got the team going when he took a stretch pass up the middle from William Villeneuve and snapped a shot glove side past Goobie at 13:59.

After Alexandrov went off for high-sticking the Sea Dogs took to the power play and it was rookie Joshua Roy scoring his fifth of the season at 17:21 to bring the Sea Dogs within one.

50 seconds later Poirier found a rebound just outside the slot and ripped a shot high to bring the Sea Dogs back and tie the game with under two minutes to go.

Saint John had chances in the final seconds but Goobie held on to send the game to overtime.

Shots in the third were 12-8 Saint John.

A minute into overtime a costly turnover at the blueline sent the Islanders the other way on a 2-0 and it was Brett Budgell with the game winner. 7-6 Charlottetown.

Patenaude and Goobie each finished with 25 saves.

These two teams meet again less than 24 hours from now as the Sea Dogs host the Islanders Saturday night for their annual Pink in the Rink game. Fans will have the opportunity to purchase raffle tickets in support of cancer research with lucky winners taking home limited edition game worn pink Sea Dogs jerseys. Get your game tickets now at the box office or online by clicking here.