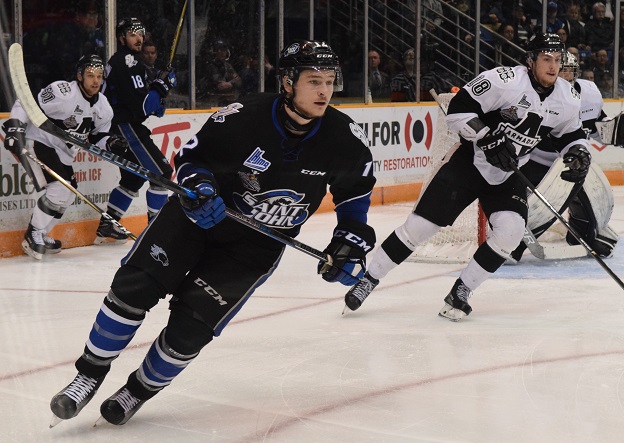 SAINT JOHN – Julien Gauthier scored twice and added an assist and Callum Booth made 27 stops for the shutout as the Saint John Sea Dogs blanked the Blainville-Boisbriand Armada, 4-0, in Game 2 of the Rogers President Cup Final, Saturday at Harbour Station.

For Gauthier, it was his second consecutive two-goal, three-point performance. Booth’s shutout is his third of the postseason, a new playoff record for Saint John.

Mathieu Joseph and Spencer Smallman each had a goal and an assist.

Saint John opened the scoring with 37 seconds left in the first period.

Bokondji Imama had the puck on the left side of the neutral zone and saw Gauthier open on the right wing. Gauthier whistled a heavy wrist shot over the left shoulder of Armada goalie Samuel Montembeault.

Joseph doubled the lead on the next shift, just 17 seconds later.

Smallman took a pass near the left side of the blueline, and then found Joseph streaking into the middle. The Tampa Bay Lightning prospect ripped a quick wrist shot past Montembeault’s glove.

There was no scoring in the second period.

The Sea Dogs earned a 5-on-3 power play that lasted more than one minute, but could not extend their lead.

Blainville-Boisbriand got a man advantage late in the frame. Their best chance to score came from a low wrist shot from the top of the left circle that was stopped by Booth. A scramble ensued and the goaltender ended up face-down in the crease, but he kept the puck out.

Saint John opened up a three-goal lead with a power play strike four minutes into third.

A shot from the middle of the blueline was deflected on goal, with Montembeault kicking it into the right circle. Joseph recovered the puck and sent a quick pass to the top of the left circle where Smallman crushed a one-timer past a sprawling goalie.

Gauthier wrapped up his three-point night more than a minute later.

Joe Veleno stole the puck and fired a low shot from the high slot that Gauthier redirected on goal. Montembeault made the stop with his right leg, but Gauthier knifed the rebound just across the goal line to make it 4-0.

The big winger did not finish the game after he was assessed a major penalty for checking to the head, and game misconduct, for a hit on Armada forward Joel Teasdale with about 12 minutes to go.

Montembeault made 33 saves in the loss.

Gauthier and Booth were named first and second stars, respectively. Mathieu Joseph’s two points made him third star in front of 5,872 fans in attendance.