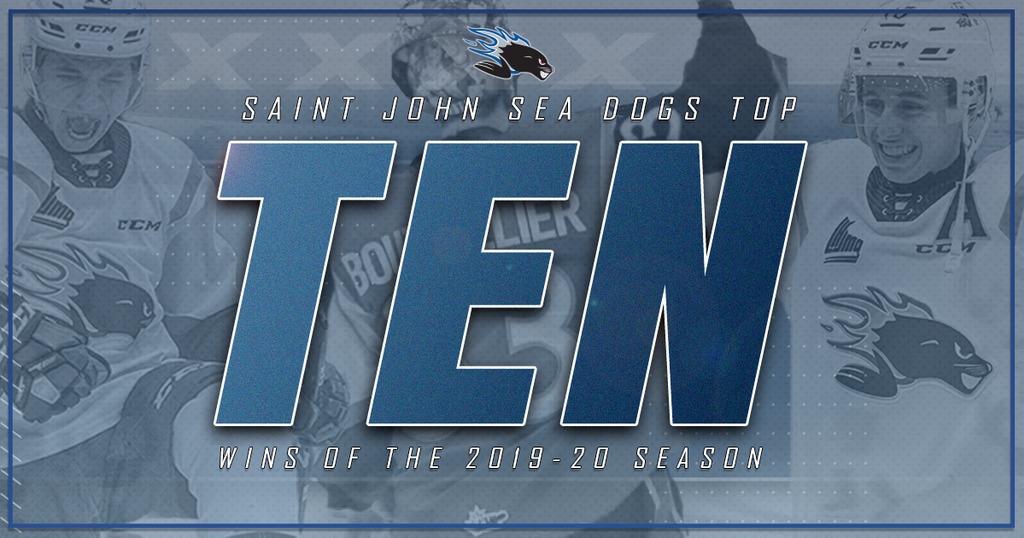 Noah Patenaude had already secured his first QMJHL win, a 4-3 road win against Bathurst on November 23rd, but Sea Dogs fans hadn’t seen the highly touted Swiss-Canadian rookie win on home ice. The young netminder was 0-2 to start the season at home with a combined save percentage of .838, but this was his coming out party.

After a nervous first few minutes, Patenaude put on a spectacular show by stopping 29 straight shots and finishing the game with 38 saves in 61 minutes of action. His performance garnered a selection as first star of the game accompanied by an ovation from the Saint John faithful.

A historic evening for the Sea Dogs franchise as they kicked off their 15th season in the QMJHL with the first game under the new arena title, TD Station.

Sea Dogs fans were excited to see the progress their young stars had made over the summer, and the 17-year-old core did not disappoint, combining for six points in the 4-3 win. Dawson Stairs had the game winner, the first of his QMJHL career.

Cape Breton had embarrassed Saint John during their previous two games at Centre 200, erasing a 5-0 deficit to win 6-5 and then pounding the Sea Dogs 8-3 the following night. Two months later and this was a different more mature Sea Dogs team.


Captain Nicolas Guay scored twice in the opening frame followed by Brady Burns with under three seconds to go in the period to put Saint John in front, 3-1. Cape Breton did claw back but Bouthillier was incredible for the next 45 minutes making 41 saves including seven in overtime to force a shootout.

Bouthillier continued his dominance in the shootout stopping all three attempts (poke check!) while Jérémie Poirier scored the winner, to keep a perfect 100% success rate in shootout attempts on the season.

An important win no matter how you slice it. The Sea Dogs and Drakkar were battling most of the season for playoff positioning. On top of that, Saint John owned Baie-Comeau’s first round pick (Alex D’Orio trade); any point separation they could instill would pay dividends two-fold.

Noah Patenaude had the game of his junior career making 50 saves, while Vander Voet, DesRoches and Cajkovic chipped in with goals. Brady Burns then had maybe the goal of his junior career as he split the Drakkar defenders and roofed it backhand for the overtime winner.


Saint John finished ahead of Baie-Comeau in the standings by two points, and the Drakkar’s 15th place finish translated to a third overall selection in the draft lottery. 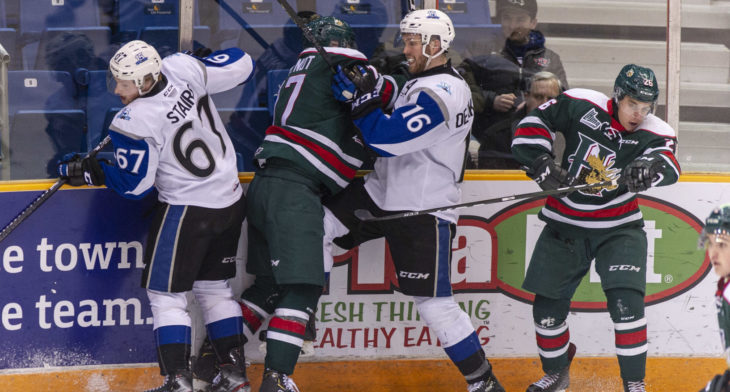 This was the make-up game for the scheduled February 7th home game featuring a performance by hip-hop artist Classified. The concert went on that night, but the game did not as Halifax was unable to travel to Saint John in time for the game due to weather. The two teams did meet shortly after in Halifax with Saint John coming out on top in a wild 9-7 game, but all eyes were on Halifax’s return to TD Station.

Rookie Joshua Roy opened the scoring with his 14th of the season and Charlie DesRoches sealed it with a short-handed goal. We got the two points.

The nerves and anticipation were high as Saint John kicked off a three-game road trip through Quebec with a weekday game in Gatineau. Jeff Cowan would be making his debut as interim head coach after serving as assistant and then associate for five seasons.

The start to the game wasn’t exactly what fans were hoping for. Gatineau scored back-to-back goals and had a 2-0 lead just 3:38 seconds into the game. The Sea Dogs did not back down as Cowan steadied the team and a pair of power play goals had the game knotted at two a piece. The teams would add another each and they headed to the dressing room tied 3-3.

After a slow start the Sea Dogs came out firing in the second, scoring four straight goals en route to an 8-4 victory, their most goals in a game at that point in the season. Fifteen different Sea Dogs had points and rookie Noah Patenaude made 22 saves for his third straight win. 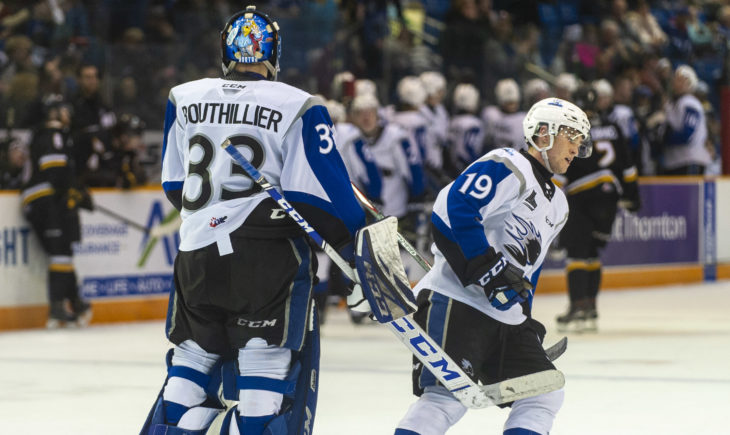 Saint John’s struggles against a bigger, older Cape Breton team were no secret. The Eagles had bested the Sea Dogs in 5 of their 6 meetings out scoring them 37-20. With the Christmas trade acquisitions of Shawn Element and Xavier Bouchard the Eagles looked to be even stronger—but strange things can happen on leap days.

Saint John got out to an early lead in a back-and-forth period that had each team finish with 14 shots. Saint John doubled up six minutes into the second, but the Eagles came screaming back.  Cape added two goals on 21 shots in the period, but rookie Joshua Roy snatched the lead back with his 15th of the year with a minute to go in the period.

The Eagles pepper Bouthillier for 20 shots in the third period but the team stayed resilient and added two more goals, one from Anderson MacDonald and an empty netter from Jeffrey Durocher. Bouthillier finished with 51 saves for the win, the highest total in a win in his career.

Saint John was 6-1 against the Titan heading into this Sunday afternoon home game. A quick power play goal by Josh Lawrence just minutes in had all signs pointing to another Sea Dogs win, but the Titan kept battling back. The Sea Dogs held onto the lead 4-2 heading into the third period, but two late goals had the game tied with under two minutes to play.


After a clutch face-off win by Maxim Cajkovic Saint John had only seconds left on the clock to get the win in regulation. William Villeneuve found Anderson MacDonald in the high slot and the Quispamsis native ripped a shot for the go-ahead goal with four seconds left on the clock, sealing the win and handing his former team the loss. The win, revenge, and hometown hero status all with one shot. 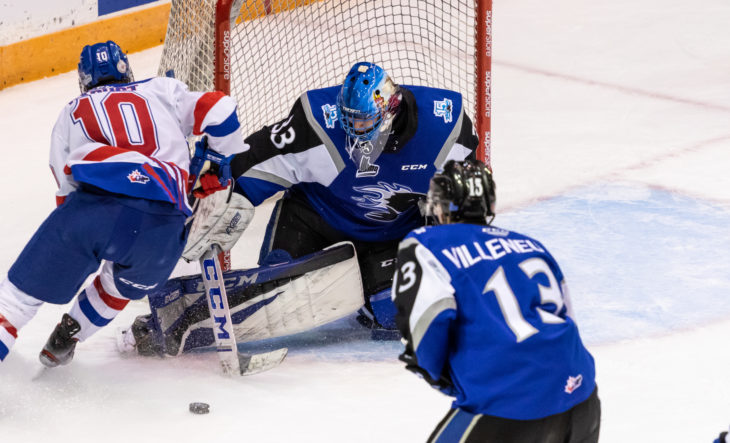 It was the one-year anniversary (minus a day) that Mikhail Denisov backed the Sea Dogs to a 1-0 win over the Sea Dogs top rival, the Moncton Wildcats, and history repeated itself. Hometown kid Kale McCallum scored the lone goal, his second of the season and Bouthillier made 43 saves for his first of two shutouts in 2019-20.

Zachary Bouthillier gave us 1560 reasons (really, that’s how many saves he made) why he should (and did) win the Bell Aliant MVP Award this season, and no game captured his contributions more than this win against his former team. It was the third of a four-game road trip through Quebec, with Saint John dropping the first two games against the Oceanic and the Remparts. Pitted against a loaded Chicoutimi team that included Dawson Mercer, Raphael Lavoie and Rafael Harvey-Pinard, the odds were heavily in the home team’s favour.


The Sags jumped out to a quick 2-0 lead in the first, but Saint John rallied, scoring three straight while Bouthillier would shutout the sags for the next 43 minutes. Chicoutimi tied it halfway through the third before Brady Burns took the lead back with just over three minutes left to play. The win seemed locked up until Lavoie scored with four seconds left. Momentum was fully in Chicoutimi’s favor and they dominated possession in overtime, but Saint John held on to force a shootout. Brady Burns undressed Alexis Shank for the shootout lead and Bouthillier capped off a perfect 3-for-3 shootout with a poke-check on Dawson Mercer sealing the win. Bouthillier’s emphatic celebration perfectly emulated Sea Dogs nation’s collective sigh of relief.