MENU
In response to the suspension of the season by the QMJHL, the Sea Dogs office will be closed until further notice. Please see the below announcement re: existing tickets and flex vouchers. Please hold on to any unused tickets. For questions/information please contact info@saintjohnseadogs.com We thank you for your patience and understanding as we continue to work through this.
February 29, 2020 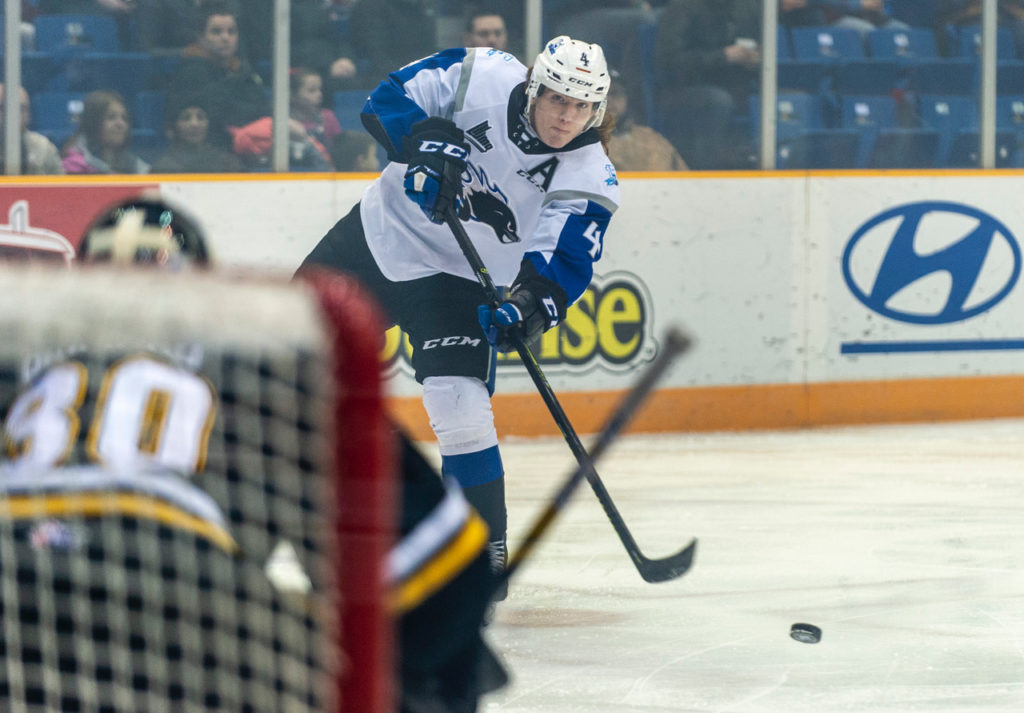 Zachary Bouthillier backstopped the Saint John Sea Dogs (29-29-1-0) to a 5-4 win against the Cape Breton Eagles (37-18-2-1) with a stellar 51 save performance at TD station on Saturday night. Three-point nights from Joona Lehmus and Ben Badalamenti led the Sea Dogs in scoring on their Leap Day win.

Joona Lehmus opened the scoring with his second of the season, a one timer from the blue line off a pass from Ben Badalamenti at 6:31.

A holding penalty to Charlie DesRoches at 11:21 sent the Sea Dogs to the penalty kill. The kill was successful as the Sea Dogs kept the pressure on the Eagles, getting shorthanded scoring chances and keeping the play in the Eagles zone.

William Villeneuve received a hooking penalty with one-minute remaining in the period.  Play went to four-on-four 20 seconds later when Adam McCormick was sent off for slashing.

With seven seconds left in the period, Jeffrey Durocher was sent to the box for hooking, and the Sea Dogs went into the second period with a four-on-three penalty kill for one minute.

Shots after the first were tied at 14.

The Sea Dogs kept their lead thanks to successful penalty kills and a huge save by Zachary Bouthillier on a three-on-one attempt by the Eagles.

An excellent passing play by Joona Lehmus got the puck to Ben Badalamenti behind the defence for a tap in goal at 6:14.

Egor Sokolov gave the Eagles their first goal of the night, scoring on a breakaway at 11:17.

A penalty for too many men at 12:25 sent the Sea Dogs to the penalty kill for the fourth time of the night. Shawn Boudrias scored his second of the game, tying the score on the power play.

Joshua Roy gave the Sea Dogs the lead, extending his goal streak to six games, picking up a pass from Ben Badalamenti and sliding it five-hole with 1:04 remaining in the period.

Shots going into the third were 35-23 for the Eagles.

The Sea Dogs increased their lead to two early in the third. Anderson MacDonald slammed the rebound off of a shot by Nicholas Deakin-Poot into the back of the open net 1:01 into the period.

The teams played four-on-four for two minutes at 10:27 after Jérémie Poirier and Tyler Hinam were sent off for unsportsmanlike conduct.

Shawn Boudrias scored his second of the night and brought the Eagles within one, scoring off his backhand, at 15:35.

The Sea Dogs called a timeout with 1:49 remaining in the game.

Eagles netminder William Grimard was pulled and Jeffrey Durocher scored into the open net with 1:02 remaining.

With 39 seconds left, the Eagles brought it back within one with a goal from Mathias Laferrière and called a timeout.

1 Zachary Bouthillier (51 saves)
2 Shawn Boudrias (2G 1A)
3 Joona Lehmus (1G 2A)
The Sea Dogs will finish out their homestand tomorrow, March 1, against the Charlottetown Islanders in their first of three straight meetings against the Maritime rivals. Puck drop is at 3PM. Tickets are available at the TD Station Box Office and online.