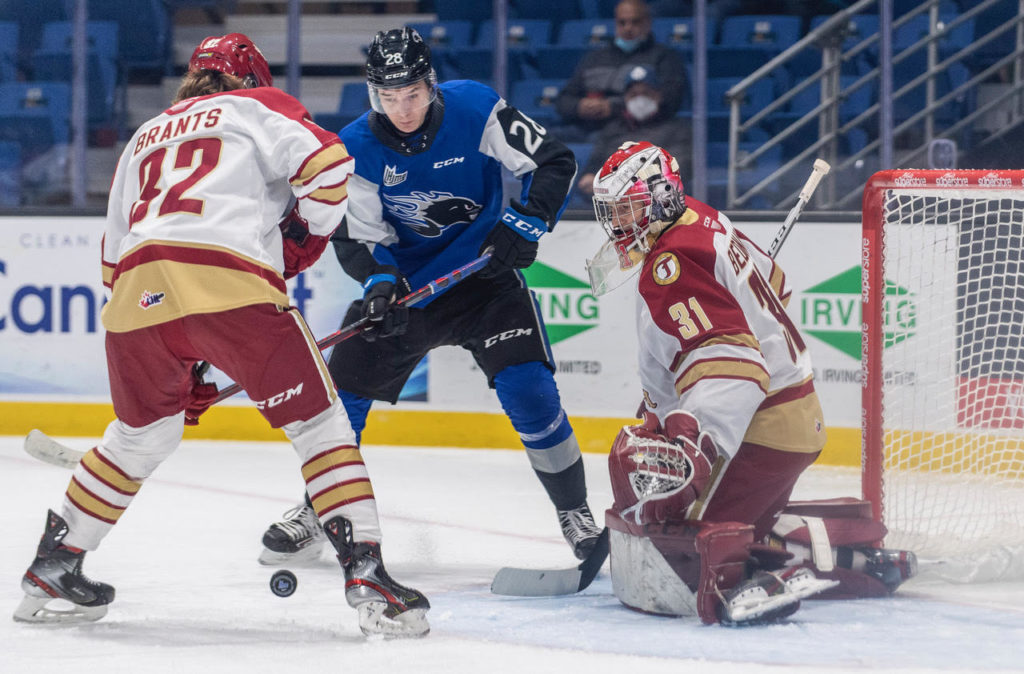 The Saint John Sea Dogs (3-3-0-2) defeated the Acadie-Bathurst Titan (6-1-0-1) in their Wednesday night matchup at TD Station. In their third meeting of the season, the Sea Dogs gave the Titan their first regulation loss of the season with goals coming from William Dufour, who scored two in the first period,  Jérémie Poirier, Cole Foston, with his first as a Sea Dog, and Brady Burns, with the game winner.

Noah Patenaude got the start in net for Saint John, making 39 saves on 43 shots, and Jan Bednar started in net for Bathurst, stopping 36 of the 41 Sea Dogs shots.

Before the puck dropped, Noah Patenaude was awarded the Swagelog Student of the Month, and Gordie Dwyer was recognized for his performance as an assistant coach with Team Canada at the IIHF U18 tournament in their gold medal win in Dallas last May. 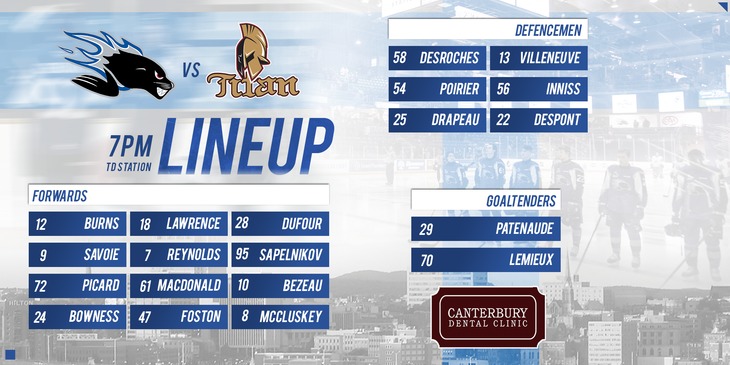 The Sea Dogs took a penalty at 2:14. Evgeny Sapelnikov was sent off for interference and with 48 seconds remaining in the power play, a rolling puck found its way past Patenaude and the Titan took an early lead.

William Dufour tied the game up a minute and a half later with a snipe of a shot, picking up a pass from Josh Lawrence behind the Titan defensemen and shooting the puck past Bednar’s elbow. Dufour scored another one soon after and the Sea Dogs took the lead. A quick one timer in front of the Titan net off a pass from Brady Burns.

The Sea Dogs received two power plays, when Cameron Henderson was sent off for checking from behind and Dylan Andrews was sent off for holding three minutes later, but did not capitalize either.

Riley Bezeau was sent to the box for cross-checking with 6:33 remaining in the first period. Logan Chisholm scored on the power play and tied the game up at 2.

Shots at the end of the first period were 23-11 for the Sea Dogs.

The Sea Dogs took the lead again early in the second frame. Jérémie Poirier scored his fourth of the season getting in close with the netminder and flipping the puck over him on a backhand shot at 3:45.

Sea Dogs went to the penalty kill when Chris Inniss was sent to the box for interference. Jacob Melanson gave the Titan the tie 14 seconds into the man advantage.

A scramble in front of the Titan net allowed a bouncing puck to find its way past the goaltender and the Sea Dogs took the lead once again. The goal was awarded to Cole Foston, his first as a Sea Dog.

Inniss received a penalty for delay of game with 3:32 remaining in the second. Play went to 5 on 3 for 1:44 when Vincent Despont was sent off for cross checking. As the first penalty ended, the Titan got their fourth goal, finding the open side of the net to tie the game up.

Shots at the end of the second period were 32-31 Saint John.

Brady Burns gave the Sea Dogs the lead with their fifth goal of the night at 3:22, completing a tic-tac-toe play off a pass from William Dufour.

Bathurst pulled their goalie and put the pressure on the Sea Dogs with the extra man, but the Sea Dogs held onto the lead and won the game 5-4.

The Sea Dogs will be hosting the Moncton Wildcats for their first meeting this season Saturday, October 23 at 7 PM. Doors open at 6 PM. Tickets are available at the TD Station Box Office and online.