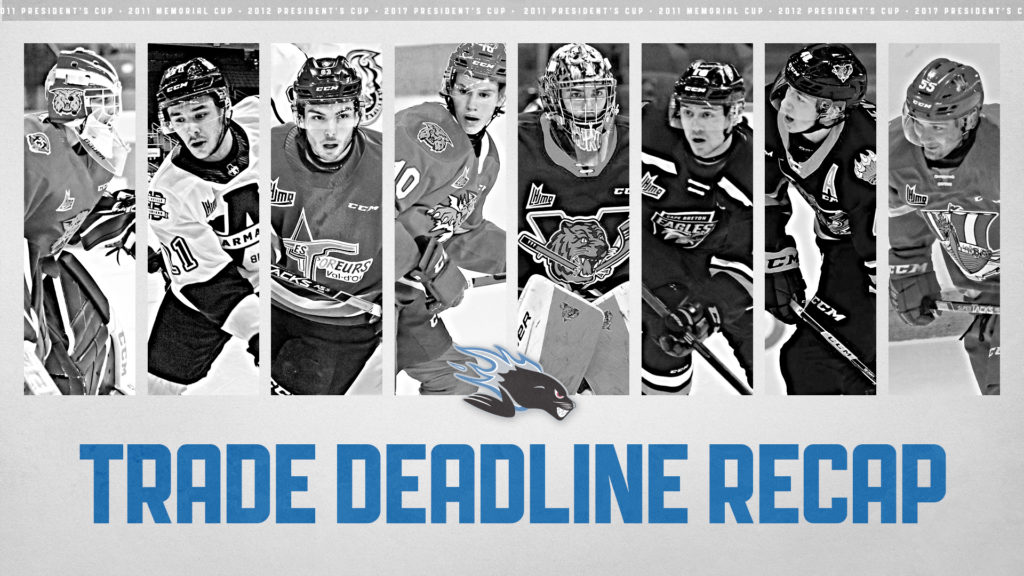 The Saint John Sea Dogs had a busy trade period, loading up for the second half of the season and as they prepare to be the hosts of the 2022 Memorial Cup presented by Kia. Sea Dogs President & General Manager Trevor Georgie kept us in suspense, with no fewer than five blockbusters on the final day of the trade period.

The Sea Dogs completed the trade period acquiring two goaltenders, four forwards, and one prospect in a period of a few hours. These moves came after the Sea Dogs opened up the trade period with the acquisition of a top 20-year-old defenseman. With the trade period complete, the 2021-2022 Sea Dogs have the most NHL Draft Picks in the CHL with eight.

“Typically the Memorial Cup host team gets three trade periods to make adjustments to their team” said Georgie. “With the announcement coming in September, we only had this one window, so there was no margin for error. It’s the first and possibly the last time we will get to host the Memorial Cup in Saint John, and we didn’t want to have any regrets.”

Here is a recap of the trade period that was.

The Sea Dogs opened the trade period with the acquisition of 20-year-old defenseman Vincent Sévigny from the Victoriaville Tigres. The 6’3” 185 lb blueliner won the President Cup last season, putting up 10 points in 19 playoff games. He is currently fourth in the league in defensive scoring with 24 points, four points behind his now-teammate Jérémie Poirier. He has attended NHL training camps with the Toronto Maple Leafs, Ottawa Senators, and LA Kings.

The trade period then went quiet for the Port City team, with no more trades until January 6th. Then, with just hours remaining in the trade period, the team made five blockbuster trades to bolster the lineup.

It began with the addition of President Cup Champion Nikolas Hurtubise, joining his former Tigres teammate Sévigny, along with prospect Danny Akkouche. Hurtubise put up a stellar performance in the 2021 President Cup Playoffs, helping to lead his team to victory with a .908 save percentage and 2.56 GAA in 16 playoff games.

The next trade announced was the acquisition of gritty sniper Marshall Lessard from the Val D’Or Foreurs. Missing the beginning of the season due to injury, the 5’10” 190 lb forward has not missed a step since returning to play, putting up 11 points in his nine games this season, including seven goals.

A trade with Cape Breton brought two-way character forward Connor Trenholm to the Port City, in exchange for forwards Carter McCluskey and Charles Savoie. The 18-year-old was an assistant captain with the Eagles and has 5 goals and 12 points in 28 games this season. The 6’1” 192 lb forward from Cole Harbour, NS was invited to the Florida Panthers training camp before this season began.

Connor Trenholm is ready to bring his physical and fast paced game to the Port City. 💪#CityofChampions pic.twitter.com/UrLjH40SUO

A rare blockbuster ten-piece trade with provincial rivals, the Moncton Wildcats, was the biggest surprise of the deadline. The Sea Dogs acquired forwards Philipe Daoust and Nick Blagden, as well as goaltender Thomas Couture, in exchange for goaltender Jonathan Lemieux, prospect Natan Grenier, and draft picks. Daoust was a sixth round selection of the Ottawa Senators and has spent this season with their AHL affiliate in Belleville, putting up five points in 15 games. The 6’00” 170 lb forward scored 13 goals and 57 points in his 79 games with Moncton. Daoust has been since been assigned to the Sea Dogs by the Senators.

Philippe Daoust is coming back to the Q and he’s ready! 💪 pic.twitter.com/J2qrVWXOma

Goaltender Thomas Couture is tied for fourth in wins in the QMJHL with 11 and has a .907 save percentage and a 3.14 GAA in 18 games this season. Physical forward, and lifelong Sea Dogs fan, Nick Blagden fulfills a childhood dream joining his hometown team as they go for the Memorial Cup. Blagden has four points in thirteen games so far this season with Moncton.

The final trade of the day, was the addition of Latvian forward Raivis Ansons from the Baie-Comeau Drakkar. A fifth round draft pick of the Pittsburgh Penguins, the 6’01” 190 lb forward is returning from winning silver at the 2022 IIHF U20 World Championship, Division I, Group A with Team Latvia. He has six goals and 24 points in 19 games this season.

The additions of Daoust and Ansons, prospects for the Senators and Penguins respectively, join Ryan Francis (CAL), William Dufour (NYI), Cam MacDonald (TB), Yan Kuznetsov (CAL), William Villeneuve (TOR), and Jérémie Poirier (CAL) on the Sea Dogs and increase the number of NHL drafted players on the roster to eight, the highest in the CHL.

“We wanted to give our group the best chance to bring the cups back to Saint John” said Georgie. “We have been putting this team together for our fans since the 2018 draft. We won the right to host the Memorial Cup this past September and now we made the moves this deadline to give the team its best chance of winning. Now it is up to them.”