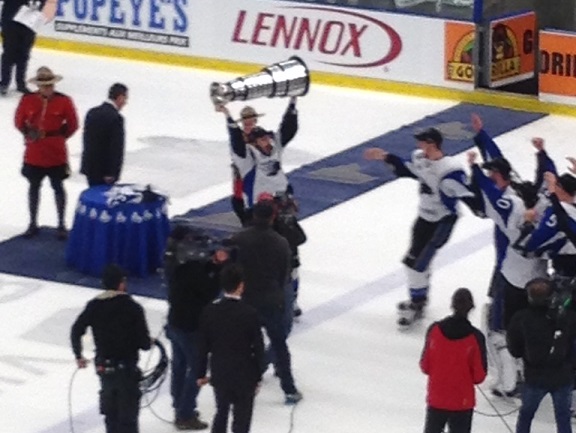 BOISBRIAND, QC – The Saint John Sea Dogs have won the 2017 QMJHL President Cup after a 5-1 victory over the Blainville-Boisbriand Armada in Game 4, Wednesday at Centre d’Excellence Sports Rousseau.

Pierre-Luc Dubois scored the lone goal for the Armada.

Saint John defenceman Thomas Chabot was named the most valuable player of the playoffs.

It’s the third President Cup title in franchise history, and it came exactly five years after the team’s second championship in 2012.

The Sea Dogs have earned a berth in the 2017 MasterCard Memorial Cup in Windsor, Ontario.

Imama opened the scoring seven-and-a-half minutes into the game.

Matthew Highmore took the puck into the left corner and slid a pass back into the circle. Imama flicked a hard backhand shot under the blocker of Armada goalie Samuel Montembeault.

Saint John doubled its lead on a power play with under three minutes left in the first.

Highmore took a pass at the right wing side of the crease and whipped a backhand pass to Smallman in the bottom of the left circle. The Sea Dog captain snapped a one-timer past a helpless Montembeault.

Blainville-Boisbriand countered with a power play goal of its own nearly 14 minutes into the second period when Dubois took the puck off the right boards, moved into the slot and rifled a wrister beyond the blocker of Callum Booth in the Saint John goal.

But Bourque restored the Sea Dogs’ two-goal lead under two minutes later, as the teams skated 4-on-4

The Armada turned the puck over in their own zone. Smallman grabbed it in the right corner and saw Bourque charging the net. The blueliner snapped a shot past Montembeault’s blocker to make it a 3-1 game.

The Sea Dogs earned a 5-on-3 power play early in the third period and extended their lead.

Smallman took another pass in the bottom of the left circle and blasted another shot past Montembeault to make it 4-1.

Highmore wrapped up the scoring with under five minutes left in the third period.

The overage centre took a pass near the Armada blueline, carried it across the line, and ripped a wrist shot from the middle of the ice over the glove of a surprised Montembeault to make it 5-1.

Booth made 20 saves for the win. Montembeault took the loss with 29 stops.

Saint John’s next game is the opening game of the 2017 MasterCard Memorial Cup on Friday, May 19th, at 8 p.m. (Atlantic Time) against the host Windsor Spitfires.