MENU
In response to the suspension of the season by the QMJHL, the Sea Dogs office will be closed until further notice. Please see the below announcement re: existing tickets and flex vouchers. Please hold on to any unused tickets. For questions/information please contact info@saintjohnseadogs.com We thank you for your patience and understanding as we continue to work through this.
October 19, 2019

Special Teams the Decider in Sea Dogs loss to Islanders 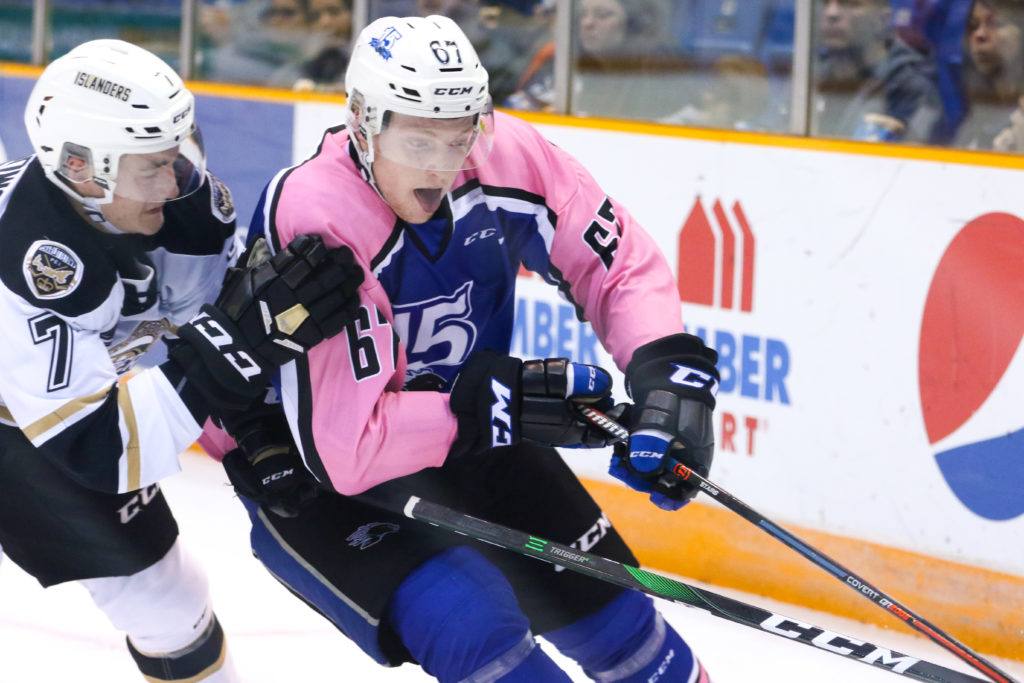 Donned in pink jerseys for their annual Pink in the Rink night to raise money for cancer research, the Saint John Sea Dogs (4-7-1-0) faced off against the Charlottetown Islanders (8-1-3-0) for the second time in as many nights on Saturday evening. Following an exciting late game push to get one point in overtime on Friday, the Sea Dogs attempted to continue that momentum at home.

Zachary Bouthillier got the start, stopping 20 of 24 shots in the 4-2 loss.

The Sea Dogs penalty kill went to work early in the first period after Nicholas Deakin-Poot received a slashing penalty at 14:29. The Islanders capitalized on the chance and broke the 0-0 tie. Brett Budgell took a puck that Bouthillier thought he had covered and tapped it in.

The momentum was in the Sea Dogs favour after that, with most of the play being in the Islanders’ zone. The Dogs were unable to get the puck past the number one goaltender in the league and the score remained 1-0 going into the second.

Shots after the first were 10-7 for Saint John.

The Islanders came out hot, scoring 43 seconds into the period when Patrick Leblanc sent the puck past the Sea Dogs defencemen and Drew Johnson was able to tap in.

The Sea Dogs went to the penalty kill for the second time of the night after Jordan Spadafore was given a delay of game penalty for sending the puck over the glass at 18:18. Nikita Alexandrov scored on the power play.

Saint John’s power play got their first chance of the night at 16:19 after a penalty to Liam Peyton for roughing.

At 13:16 Gaetan Jobin sent a pass from behind the net to teammate Thomas Casey who was waiting in front and increased their lead to 4-1.

In an attempt to swing the momentum back in their favour, the Sea Dogs called a time out after the Thomas Casey goal.

The Sea Dogs power play got another chance at 12:28 because of a tripping penalty called against Zachary Beauregard.  Captain Nicolas Guay was able to convert, picking up a pass from Jérémie Poirier at the top of the circle, coming in with speed and shooting it far corner at 10:58.

The Sea Dogs penalty kill got more ice time, killing two penalties in the second half of the period. The first to Julian Vander Voet for cross-checking at 8:41 and the second to Jordan Spadafore for hooking at 4:44.

At 2:02 the Sea Dogs’ power play got their chance, and Nicolas Guay capitalized once again, firing another shot past Matthew Welsh from the top of the circle.

Shots at the end of the second were 20-15 for the Islanders.

The third period went to 4-on-4 play early on after Nicholas Deakin-Poot and Noah Laaouan were sent off for roughing after the whistle at 19:17.

The Islanders got another pair of penalties, Nikita Alexandrov at 14:10 for tripping and Xavier Bernard at 8:39 for high sticking, but the Sea Dogs power play couldn’t strike again.

Zachary Bouthillier was pulled with 1:30 remaining but the Sea Dogs were unable to score with the extra man.

The Sea Dogs will return to action on October 23rd, when they take on the Sherbrooke Phoenix at TD Station at 7pm.  Tickets are available at the TD Station box office or online.