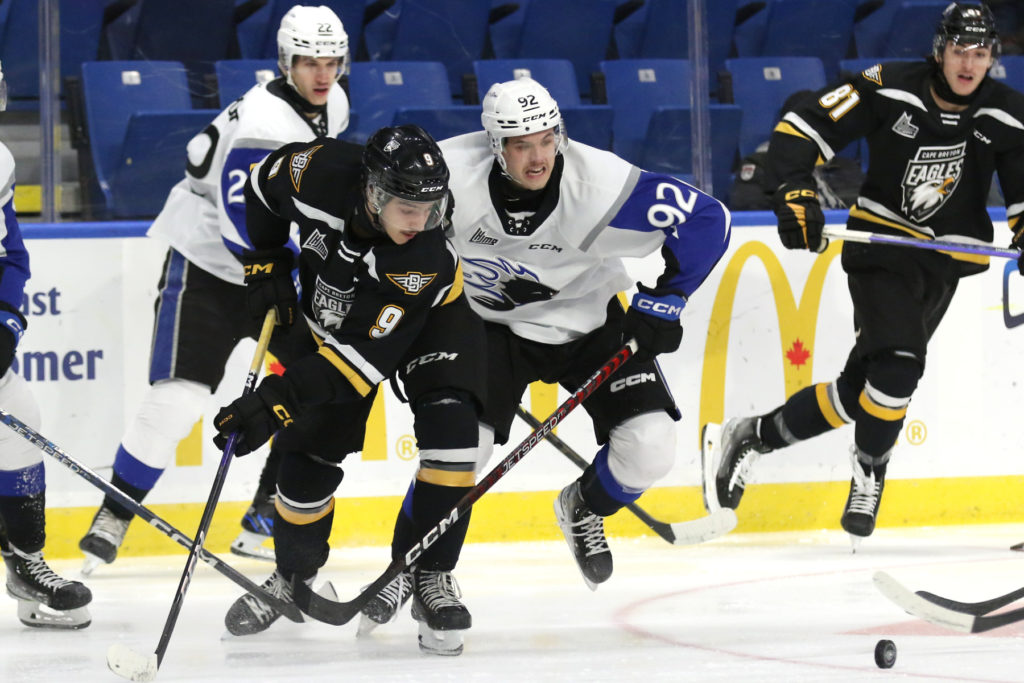 Brady Burns and Eriks Mateiko each had a goal and an assist in the win for the Sea Dogs while Nate Tivey and Noah Reinhart each had two assists. 2022 first overall pick Tomas Lavoie got his first career goal in the QMJHL for the Eagles in the loss.

Nikolas Hurtubise was solid in net for the Sea Dogs, making 36 saves to pick up the win and earn the second star. Oliver Statny had a much tougher night, being pulled after making only seven saves on 12 shots. Nicolas Ruccia made nine saves on 11 shots in relief. 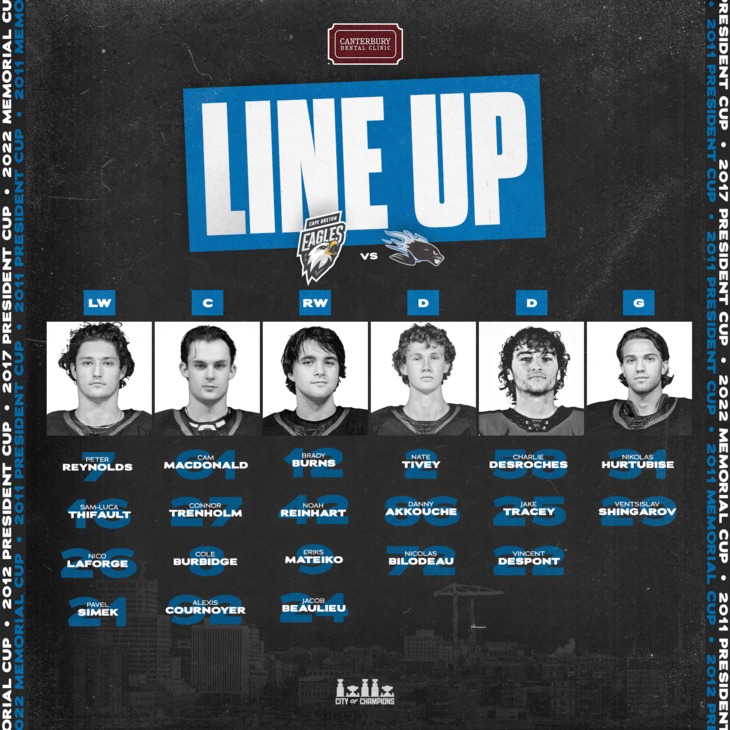 Cam MacDonald got the first scoring opportunity, receiving a pass just to the right of the Eagles goal but did not find any space past Satny.

Three minutes later, Peter Reynolds forced a turnover on an Eagles clearing attempt that was picked up and buried by Burns for the 1-0 Sea Dogs lead.

Just 44 seconds later, Cournoyer won an offensive zone faceoff back to Nicolas Bilodeau who put a point shot on that Satny got a glove on but the rebound came back to Cournoyer who put a wrist shot past Satny for his first QMJHL goal and a 2-0 Sea Dogs lead.

Just under four minutes later Cam Squires created some space, circling out to the top of the left faceoff circle for a clear shot opportunity that Hurtubise shut the door on.

Lavoie generated some more Cape Breton pressure just over a minute later with a close range shot that he got his own rebound on. He was again stopped by Hurtubise, but drew a penalty in the process.

Shortly into that powerplay Ivan Ivan one-timed a cross ice pass on net but Hurtubise once again got across to make the stop.

With just under two minutes left in the first period, Vincent Despont handed the puck off to Pavel Simek as he was heading for a line change. Simek entered the zone and threaded a pass to Cournoyer through a crowd that he fired past Satny for his second of the night and a 3-0 Sea Dogs lead after 20 minutes.

Shots were 10-8 Cape Breton in the first period.

The Eagles began the second period with dominant play in the opening six minutes, putting eight shots on net in that span that forced Hurtubise to come up big multiple times.

The two teams then traded penalties and entered some 4-on-4 action, at the end of which MacDonald came out of the box and worked a give-and-go play with Burns that MacDonald finished off to put the Sea Dogs up 4-0.

Just over two minutes later, the Eagles broke Hurtubise’s shutout when Olivier Houde gloved the puck out of mid-air, skated into the Saint John zone and found Francois-James Buteau all alone in the high slot who rifled the puck past Hurtubise to make it 4-1.

The Sea Dogs got it back just 1:38 later as Tivey put what seemed to be a harmless shot on from the point, but the puck was deflected by Sam-Luca Thifault and past Satny, restoring the four goal spread and ending Satny’s night, chasing him in favour of Ruccia.

With just under three minutes to go in the second Mateiko won a foot race to the Eagles zone, forcing Ruccia to panic playing the puck and allowing Mateiko to steal it and find a trailing Cole Burbidge who put it home to make it 6-1 heading into the third.

Shots were 25-18 for the Eagles after the second.

Just 1:48 into the third Samuel Johnson would circle behind the Sea Dogs net and tee up Lavoie to blast a slapshot past Hurtubise to cut the lead to 6-2.

The Eagles took a penalty just four seconds after that though and the Sea Dogs made them pay, with Mateiko converting just six seconds into the man advantage to extend their lead to 7-2, which stood to the final horn.

The Sea Dogs will return to TD Station this weekend for two games at home to end November. Saturday, November 26th, bring a box of essentials to the arena to donate to the Holiday in a Box campaign as the Sea Dogs take on the Val-d’Or Foreurs at 7 PM.

Sunday, November 27th, Coach Mac is back at TD Station for Lady Mo Night! The puck drops at 3 PM as the Sea Dogs host the Rouyn-Noranda Huskies. Tickets for both games are available here.