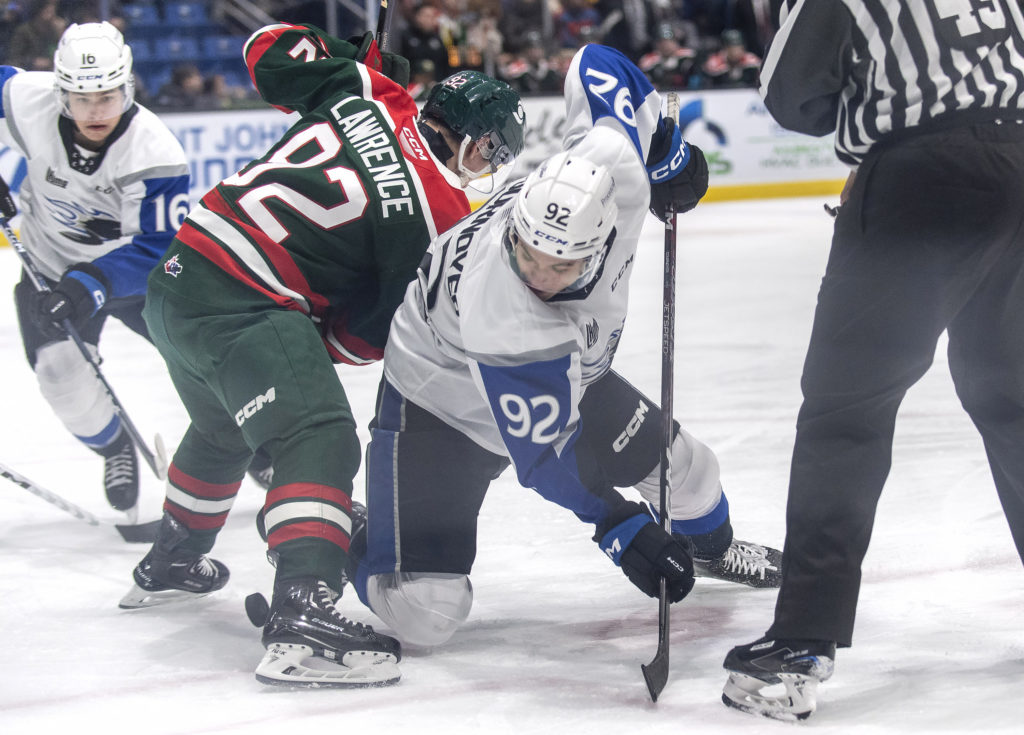 Makus Vidicek scored a pair of goals as the Halifax Mooseheads (24-7-4-1) topped the Saint John Sea Dogs (13-21-1-1) in a hard fought battle 6-4 on Friday night. Brady Burns and Alexis Cournoyer each tallied a goal and an assist, Reid Calder scored his first QMJHL goal, and Nicolas Bilodeau scored the Sea Dogs’ last goal of the night in the loss.

Dylan MacKinnon and Josh Lawrence each added a goal and an assist for Halifax while Alexandre Doucet tallied a pair of assists.

Brady James picked up the win in the Moosehead net, making 23 saves, while Ventsislav Shingarov made 31 in the Sea Dogs net. 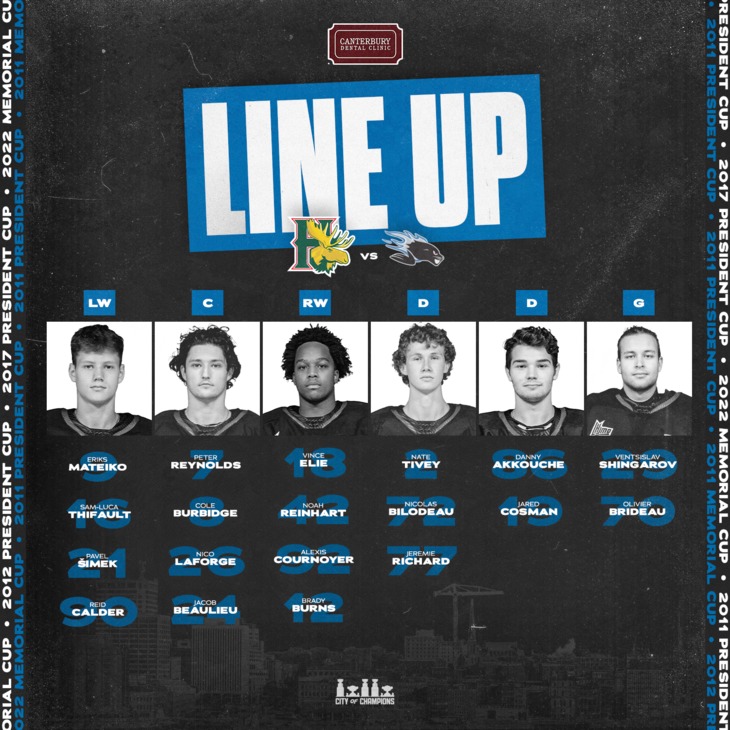 Eriks Mateiko had the first close chance for the Sea Dogs just over a minute in as the puck came to him mere feet in front of the Mooseheads goal, but his shot was stopped by James.

Just before the midway point of the first, with the Sea Dogs on the power play, Burns rang a shot off the crossbar and Cournoyer fought through traffic to corral and bury the rebound for the 1-0 lead.

Peter Reynolds nearly added to the lead three minutes later, weaving his way into the centre of the Mooseheads zone for a shot that James stopped with a blocker save.

Just moments afterwards, Vidicek appeared to tie the game for the Mooseheads, entering the zone and putting a wrist shot over the blocker of Shingarov, but the Sea Dogs goaltender was interfered with on the play by Doucet and the goal was disallowed.

Lawrence almost found the equalizer with under three minutes to go in the period, finding the puck amidst a net front scramble, but Shingarov got just enough to deflect the ensuing shot wide.

That play drew a Sea Dogs penalty, putting the Mooseheads on the man advantage for the remainder of the first, during which Halifax put four dangerous shots. Shingarov made multiple huge saves, allowing Saint John to weather the storm and hold their lead at first intermission.

Shots after the first period were 9-6 for the Mooseheads.

Halifax spent the opening five minutes hemming the Sea Dogs in their own zone, and it paid off as Vidicek banged in the Mooseheads first goal to tie the game 1-1.

Lawrence almost gave Halifax the lead just ten seconds later, putting a shot on from the Sea Dogs back door that Shingarov just got across in time to stop.

The Sea Dogs regained their lead off a fortunate bounce three minutes later as Reid Calder put a left wing shot off the helmet of James, off the helmet of a Mooseheads defender and into the Halifax net for his first QMJHL goal and a 2-1 Sea Dogs lead.

A minute and a half later Saint John put some strong forechecking on the Saint John defense and Cole Burbidge attacked the net with a trio of quality shots on James, but could not find the back of the net.

Five minutes later, Brody Fournier caught the Sea Dogs on a line change, broke in all alone and put a nice move on Shingarov to tie the game 2-2.

Halifax once again spent the final minutes of the period on the powerplay, drawing two consecutive calls. The Sea Dogs penalty kill held strong again, almost scoring on a breakaway in the final seconds from Sam-Luca Thifault, leaving the two teams tied at second intermission.

Shots after the second were 24-17 for the Mooseheads.

The two teams went back-and-forth for the first half of the third before the Mooseheads took their first lead of the game as Mackinnon took a shot on an odd man rush that deflected off a Sea Dogs defender and past Shingarov to put Halifax up 3-2.

Two minutes later, Jordan Dumais floated a shot in from the right wing that Vidicek deflected in mid-air past Shingarov to put the Mooseheads up 4-2.

The Sea Dogs answered two minutes after as Burns streaked down the left wing, faked a slapshot and instead snapped a wrister past James to cut the lead to 4-3.

1:14 later, the Mooseheads took their turn benefitting from a fortunate bounce as Nate Tivey accidentally directed the puck into his own net. Cameron Whynot was credited with the goal and the Mooseheads restored their two goal lead at 5-3.

Nicolas Bilodeau made it 5-4 with just 12.9 seconds left and Lawrence responded with an empty-netter off the next face-off to make it a 6-4 final.

Final shots in the game were 37-27 for the Mooseheads.

The Sea Dogs are back in action on Sunday, January 8th, when they play the visiting Rimouski Oceanic at TD Station. Puck drop is at 3PM and you can get your tickets at the TD Station Box Office and online.