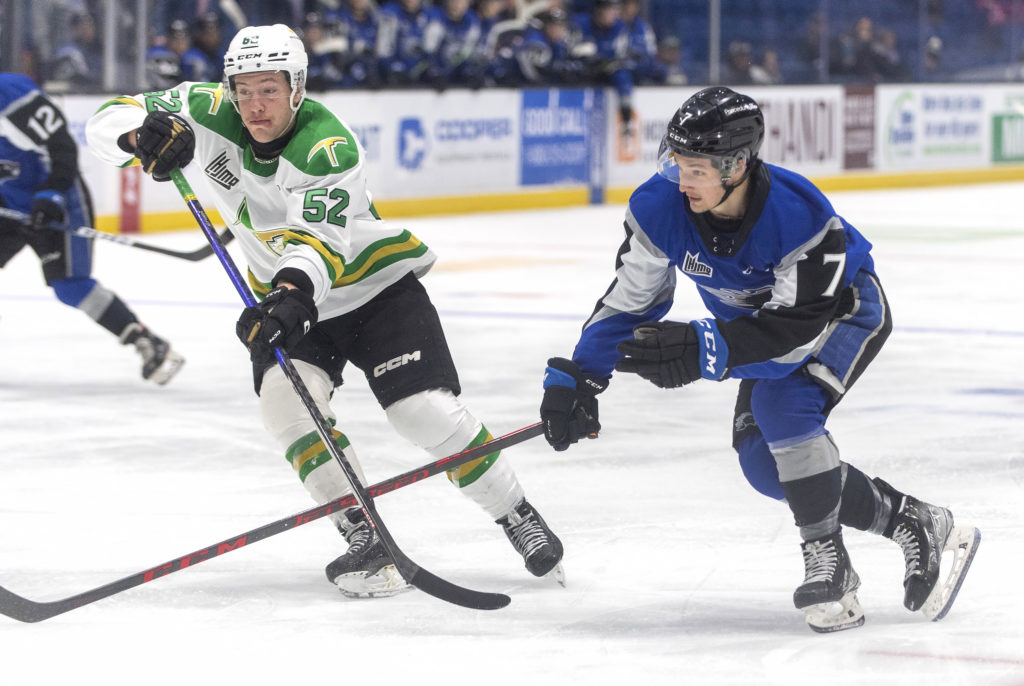 Alexandre Doucet and Justin Robidas each had three-point nights as the Val-d’Or Foreurs (13-11-2-0) topped the Saint John Sea Dogs (6-14-0-1) 4-2 on Saturday night. The game had a delayed start of 8:30pm due to high winds temporarily closing the PEI Confederation Bridge to large vehicles and interrupting travel for the Val-d’Or Foreurs.

Louis Robin and William Provost each added a goal and an assist while Zachael Turgeon had two assists. Val-d’Or’s special teams were a factor all night long, going 3/4 on the powerplay and scoring short-handed as well.

Goals for the Sea Dogs came from Pavel Simek, Nicolas Bilodeau, and Cole Burbidge, while Nate Tivey led the Sea Dogs in points with two assists on the night.

Adam Rouleau stopped 40 shots to get the win for the Foreurs while Ventsislav Shingarov stopped 18 in the Sea Dogs net. 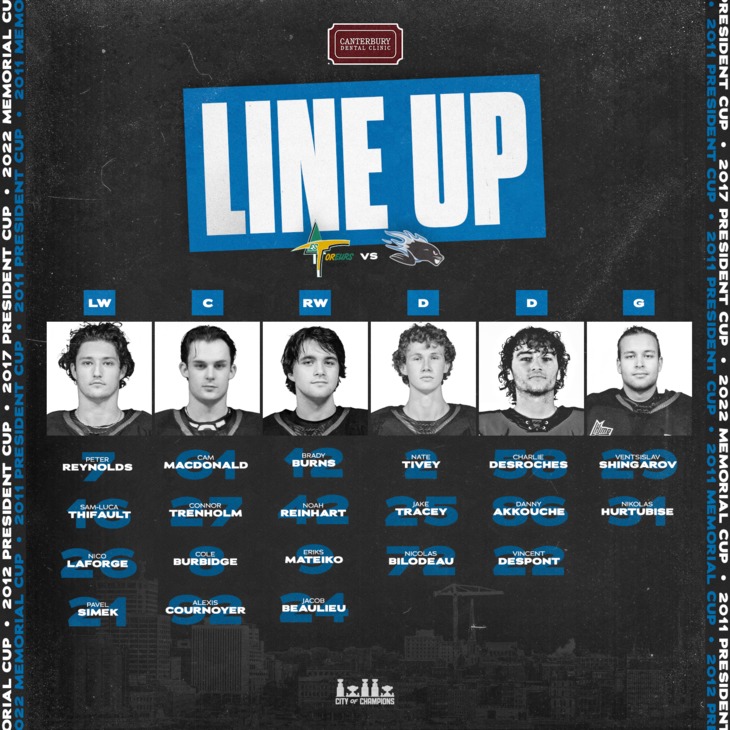 During the first period, Nathan Drapeau was welcomed back to TD Station for the first time since the Memorial Cup, this time as a member of the visiting team.

The Sea Dogs got on the board first just 2:37 in with Tivey putting a point shot on through traffic that would rebound out to an undetected Pavel Simek who put it into a wide open net for a 1-0 Sea Dogs lead.

The Sea Dogs took another penalty shortly after the goal to create some 4-on-3 action, and Robidas found Robin down low who fired a shot that Shingarov stopped, but the rebound was cleaned up by Doucet for his second goal in 33 seconds to put the Foreurs ahead 2-1.

Val-d’Or made the Sea Dogs pay again for costly penalties, swarming the Saint John zone with Provost putting a shot on that just trickled past Shingarov enough to allow Robin to sweep the puck over the line for a 3-1 Foreurs lead.

Luck swung the Sea Dogs way before the period was out, as Rouleau played the puck into Felix Lunam’s skates causing Lunam to bobble the puck and direct it into his own open net for an own goal cutting his team’s lead to 3-2 at first intermission.

Nicolas Bilodeau was awarded the goal as the last Sea Dog to touch the puck.

Shots were 16-9 for the Sea Dogs after the first.

Saint John came close to evening the score just over three minutes into the third as Peter Reynolds hit Brady Burns with a drop pass on a 2-on-1, only for Burns’ wrist shot to be stopped by Rouleau.

Alexandre Guy got in behind the Sea Dogs defence for a partial breakaway shortly after, but had both his first and second shot on the play stopped by Shingarov.

Sam-Luca Thifault and Noah Reinhart immediately came back the other way on a 2-on-1, but Rouleau shut the door on Reinhart.

Just over a minute later, the Foreurs burned the Sea Dogs on special teams again, this time springing Robidas for a short-handed breakaway that he slipped past Shingarov for a 4-2 Val-d’Or lead.

Robidas almost found the hat trick goal in the dying seconds of the same penalty, cutting to the net only to have his backhand shot denied by Shingarov.

Shortly after the teams returned to even strength, Reynolds found himself on a breakaway, but had the puck poked off his stick before he could get a shot off.

The Sea Dogs maintained the zone and Burns put a shot on net that was stopped by Rouleau, but the rebound would leak out into the crease to Cam MacDonald, but despite getting multiple whacks at it he could not bury it past the skates of the Val-d’Or defenders.

Saint John continued their momentum in the minutes that followed, with Vince Elie and Connor Trenholm both getting breakaways of their own, with neither finding the back of the net.

Five minutes later the Sea Dogs had a shift of sustained zone pressure that created another pair of chances. The first was Tivey putting a shot on the Reynolds tipped in the slot that Rouleau just got a piece of. Then Burns worked the puck back out to Reynolds from behind the net and Reynolds slid it to Charlie DesRoches in the high slot only for DesRoches shot to go high over the Foreurs goal.

Despite almost doubling Val-d’Or in shots 17-9 in the second, the Sea Dogs found themselves in a two-goal deficit heading into the third.

Shots after the second period were 35-20 for the Sea Dogs.

After a quiet start to the third period, the Sea Dogs came close yet again to cutting into the Foreurs deficit as Reynolds and Burns connected on a pair of quick cross ice passes only for Reynolds to be robbed by the left pad of Rouleau.

Val-d’Or added salt in the wound by immediately transitioning the other way. Provost cut to the net and scored to make it 5-2 Foreurs with just over seven minutes to play.

The Sea Dogs responded 3:14 afterwards as Trenholm circled the top of the Foreurs zone and dropped it to Tivey who put another good shot on from the point that was tipped by Cole Burbidge to make it 5-3.

That’s as close as Saint John would come as Guy added an empty netter for Val-d’Or to make it a 6-3 final.

The Sea Dogs are back in action tomorrow when they welcome the Royun-Noranda Huskies to TD Station. Game time is 3 PM and you can purchase tickets at the TD Station box office and online.