The Saint John Sea Dogs (5-12-0-1) lost to the Halifax Mooseheads (12-5-2-1) 9-4 in their first of two back-to-back games in Halifax this weekend. Sam-Luca Thifault netted his first QMJHL goal, Brady Burns found the back of the net twice, and Cam MacDonald scored on the power play, but it was not enough to overcome two Mooseheads hat tricks, from Jordan Dumais and Evan Boucher.

Nikolas Hurtubise got the start for the Sea Dogs, making 28 saves on 37 shots from the Mooseheads. Ventislav Shingarov replaced him briefly after the Mooseheads’ sixth goal and stopped the sole shot he faced in 2:57 of play before Hurtubise returned. Mathis Rousseau was between the pipes for the Mooseheads, stopping 28 of 32 Sea Dogs shots. 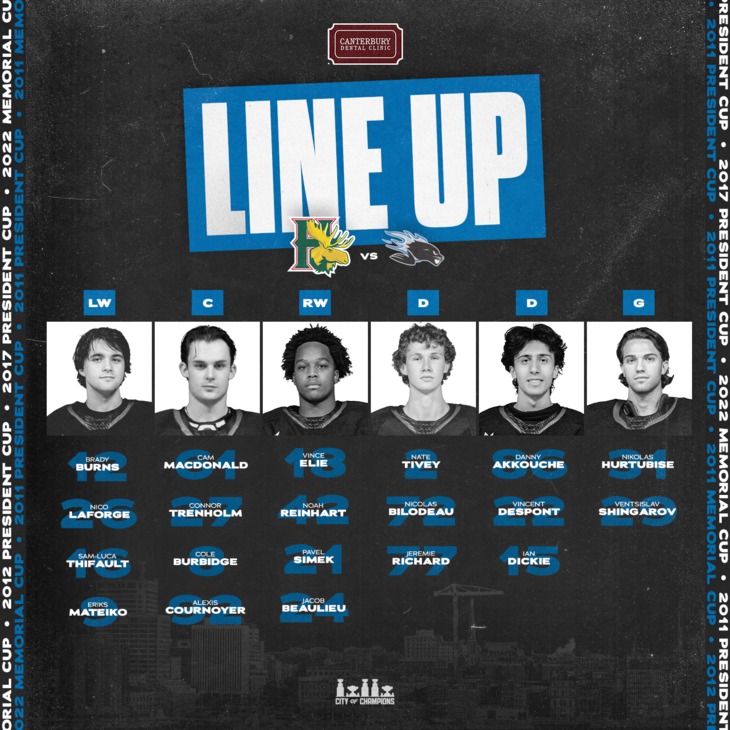 The Halifax Mooseheads started off the scoring with a goal from QMJHL scoring leader Jordan Dumais tucking the puck past Hurtubise at 4:22.

The first period progressed quickly with few whistles, until 15:04 Sam-Luca Thifault tied up the game with his first QMJHL goal, picking up the loose puck in the slot and firing it into the back of the net.

Less than a minute later though, Stéphane Jr Huard gave Halifax the lead that they would take into the second period.

At 16:16, Jordan Dumais found himself in the box on an interference call, but the Sea Dogs were not able to capitalize on the opportunity, going into the second period down 2-1.

Shots after the first were tied at 9.

Brody Fournier got on the board only 2:21 into the second period, picking up a rebound in front of the Sea Dogs net to extend the Mooseheads’ lead to two.

At 2:58, the Sea Dogs got their second power play opportunity of the night, and this time they made the most of it, and Brady Burns ripped a one timer into the net for his first of the night.

Five minutes later, Burns scored again, picking up a cross-ice pass from Cam MacDonald and sending the puck into the wide open net to bring the Sea Dogs within one.

Dumais scored his second of the night shortly after, waiting in front of the net for a pass and tapping it in once David Moravec sent it his way.

At 12:00, Evan Boucher snuck the puck past Hurtubise’s foot after Hurtubise stretched to stop the initial attempt.

Before the period ended, Mathieu Cataford was sent off for cross-checking and  Cam MacDonald scored on a power play, sending the puck top shelf through traffic at 16:28.

Shots at the end of the second were 21-19 for Halifax.

3:46 into the final frame, Evan Boucher scored his second of the night, making it 6-4. After the goal, Ventsislav Shingarov went into the Sea Dogs net. Shingarov faced and stopped one shot in the 2:57 he played before Hurtubise returned to the net.

A minute later, Brady Burns found himself in the box on a tripping call. The Sea Dogs killed the penalty successfully, keeping the game within two.

Boucher made it a 7-4 game at 9:51, followed quickly by a third goal for Jordan Dumais, both of whom completed their hat tricks.

Reece Peitzsche made it 9-4 with less than five minutes remaining, with his first QMJHL goal.

The Sea Dogs will finish their back-to-back in Halifax tomorrow afternoon with a 2 PM puck drop. You can listen to the game with Sea Dogs Radio presented by TD at CFBC 930 AM or watch at watch.chl.ca.