MENU
In response to the suspension of the season by the QMJHL, the Sea Dogs office will be closed until further notice. Please see the below announcement re: existing tickets and flex vouchers. Please hold on to any unused tickets. For questions/information please contact info@saintjohnseadogs.com We thank you for your patience and understanding as we continue to work through this.
November 2, 2019 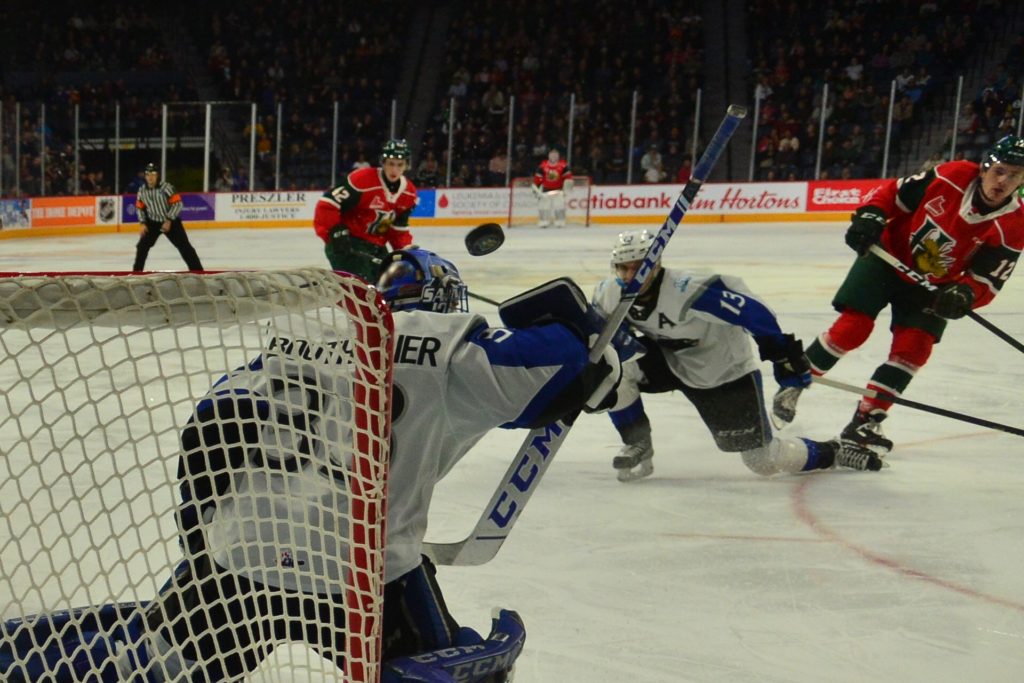 The Saint John Sea Dogs (5-11-1-0) met the Halifax Mooseheads (8-8-1-0) for the fourth time of the season at Scotiabank Centre on Saturday night.  Three goals in the second period, including Julian Vander Voet’s first of the year, sent the Dogs to their third win against Halifax in the 4-3 victory.

The Sea Dogs were forced onto the defensive to start the game.  The Mooseheads were able to keep most of the play in the first period in the Sea Dogs zone, starting with an early penalty call against the Dogs.

Justin Barron drew a hooking call against Josh Lawrence at 16:46, sending the Sea Dogs to the penalty kill for the first time of the night.  At 4:15 Jordan Spadafore was given a penalty for holding. The penalty kills were successful both times.

Shots were 10-3 for the Mooseheads after the first.

Ben Badalameni scored a goal that went under review at 17:11. He slid into Halifax’s netminder Alexis Gravel before the puck went in but the call on the ice stood and the Sea Dogs took the lead.

Jason Horvath was sent to the box at 9:59 for interference, giving Saint John’s power play their first chance of the game.

At 6:37 Julian Vander Voet scored his first goal in the QMJHL, tapping in a rebound in front of the net and giving the Sea Dogs a two-goal lead.

William Villeneuve scored at 3:20, receiving a cross-ice pass from Ben Badalamenti, sending the puck past Alexis Gravel and into the back of the Mooseheads net.

Halifax responded quickly. Raphaël Lavoie scored five seconds later, taking the puck up the right wing into the Sea Dogs zone after the faceoff and sending it past Bouthillier’s shoulder to cut the lead to two.

James White went to the box at 3:03, giving the Mooseheads another chance on the power play, but the Sea Dogs penalty kill was successful for the third time of the night.

Shots were 21-9 for the Mooseheads going into the final frame.

Maxim Trepanier sent a wrist shot past Bouthillier’s blocker side at 15:12 and brought the Mooseheads within one.

The Mooseheads got another powerplay opportunity at 7:35 when William Villeneuve was sent to the box for delay of game. Charlie DesRoches joined him in the box at 5:43, giving the Mooseheads a two-man advantage for eight seconds. Halifax called a timeout to draw up a play and they scored 5-on-3.  Senna Peeters tapped in a cross-crease pass from Benoit-Olivier Groulx and tied the game at three.

Matt Gould scored on a short-handed breakaway moments later and regained the Sea Dogs lead at 4:33 after a turnover by the Mooseheads at the Sea Dogs blue line.

The Sea Dogs kept the lead through an offensive push by the Mooseheads and won the game 4-3.

Final shots were 37-14 for the Mooseheads.

The Sea Dogs will hit the ice in a week when they begin their Quebec road trip on Saturday November 9th, taking on the Blainville-Boisbriand Armada.