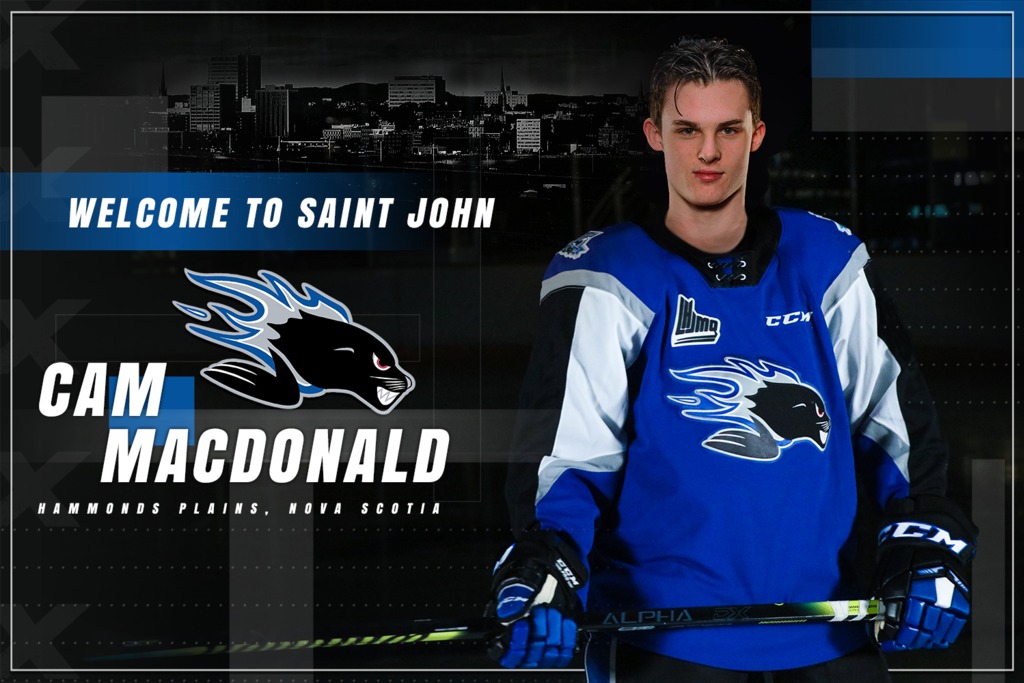 The Saint John Sea Dogs have signed 17-year-old power forward Cam MacDonald. The Hammonds Plains native was selected by the Sea Dogs after previously having been committed to Boston College in the NCAA. MacDonald was ranked 20th overall in the 2019 QMJHL Draft and was the 3rd ranked Maritime Forward. Due to his NCAA intentions, he was available at 51st overall where he was selected by the Sea Dogs.

“It means a lot to sign with an organization like Saint John,” said MacDonald. “I couldn’t be more excited to start this new journey for my hockey career. It’s been a crazy ride and I want to thank Saint John for giving me this opportunity to start a new chapter. My family has been here with me the whole time ever since I’ve started playing, supporting me with all the decisions I’ve made, and I can’t thank them enough. From a hockey standpoint I have been very lucky with Selects Academy, Sioux Falls Stampede and Boston College; all of who have helped me get to where I am today, I’m super excited to get the season started and can’t wait to get up to Saint John.”

MacDonald played last season in Sioux Falls of the USHL registering 20 points in 44 games. In 2018-2019, MacDonald played at Selects Hockey Academy 15U where he led his team in scoring with 72 goals and 126 points in 52 games.

“We’re thrilled to welcome Cam and his family to the Sea Dogs” said Sea Dogs President & General Manager, Trevor Georgie. “We know that it was a big decision for Cam and are happy that in the end, he is now one of us. Our fans are going to really enjoy him as a player.”

MacDonald, who participated in last summer’s Hockey Canada U17 Camp, joins a talented and deep Sea Dogs lineup that boasts 14 other players who have been part of their respective National Programs. He describes himself as a power forward with plenty of offensive upside.

“I like to play a power forward role. I can score and make plays but also be physical when needed. I like to match my style of play to Jamie Benn who is an elite power forward in the NHL.”

Known as a physical forward with good mobility and offensive tools, Georgie had this to say about what MacDonald will add to the group.

“Cam brings an entirely different toolbox than most, and it’s an assortment of tools that will be important in helping us win championships” said Georgie. “He can score goals, and skate, and make plays; but he also loves to hit and play physical. Cam’s tools paired with his nearly 6”2 and 190 lbs. frame are a great compliment to our group and will allow us to play a few different ways.”

MacDonald is the most recent player to make the move from the NCAA to the Sea Dogs. He is also the second player to recently de-commit from Boston College in favour of the Port City. MacDonald joins almost BC Eagles teammate Peter Reynolds, Charlie DesRoches (Northeastern), Josh Lawrence (Boston University), Matt Gould (Providence College), Michael Campoli (Boston College), Dawson Stairs, and Kale McCallum as college-bound players who have committed to the Sea Dogs in the past 24-months.

“This was Cam’s decision” said Georgie. “Every player is different and there is no “one-size fits all” option. Boston College is a great option and the Saint John Sea Dogs are a great option. It was abundantly clear that Janice and Ken (MacDonald) were leaving it up to Cam and that they would support him in whichever path that he chose. We know that Cam will help us win a championship one day so twelve months ago, we chose him. Today, Cam chose us.”