“We have to make the most of today, because we don’t know if we’ll be there tomorrow” 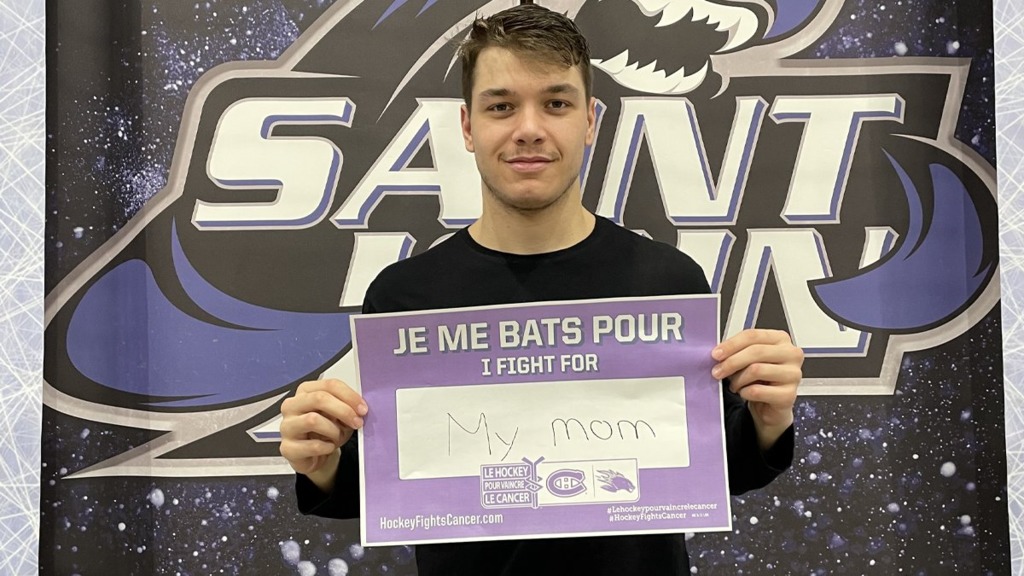 April 23, 2020 will forever be etched in the mind of Saint John Sea Dogs forward William Dufour. That day, he accompanied his mother Karine when she was diagnosed with breast cancer. Together, they won the most important fight of a lifetime, the one against cancer.

Life had never been kind to Karine Côté who, since entering her 40’s, felt that the tide was finally turning in her favor with greater responsibilities at work and the purchase of a condo in the area of Lebourgneuf, in the Quebec City region. It was during an annual doctor’s appointment that everything changed.

“I had a mammogram done in 2018 due to pain I was feeling, but the doctors could not find anything,” said William Dufour’s mother. “In January 2020, I asked my family doctor what the next steps would be. He sent me in for another mammogram and a biopsy. ”

On April 22, she received a heartbreaking phone call from her doctor asking her to make her way to the hospital with someone the next day. “I knew it,” she recalls. With the QMJHL on pause due to the COVID-19 pandemic, her son accompanied her to the hospital where the diagnosis was announced: stage 1, grade 2 breast cancer. “At this point, everything stopped. William held my hand and I started to cry.”

The Sea Dogs forward also remembers that day vividly. “It was a good slap in the face. However, the earth does not stop turning. I received a lot of support from my friends, including Xavier Simoneau. I knew I was not alone in all this,” he says.

William Dufour fights for his mom,
Karine, who will be one of the cancer survivors doing our ceremonial puck drop tonight 💜#HockeyFightsCancer pic.twitter.com/ThYisSjGjO

At the beginning of June, an operation to remove the cancerous mass was successfully done. The New York Islanders prospect’s mother had to travel to Hôtel-Dieu in Quebec City every day for a month to receive radiation therapy, followed by hormone therapy, a pill she could take at home. Even if the side effects were terrible for the one who managed to escape chemotherapy, Karine was able to remain positive despite everything that was going on.

“You don’t have a choice. In the end, 75% of the battle is healing. I didn’t let it crush me. I am alive and I am still here. I was exhausted and sometimes I bawled my eyes out before going to bed. I wondered why all this was happening to me, but I fought for my son,” she proudly says.

The support Karine and William received from their entourage was very important. “My billet family in Drummondville came down to bring us a bunch of pre-cooked meals. The COVID pandemic actually happened at the right time, because I was able to be at home with my mother full time,” said the forward, who currently finds himself among the Q’s top scorers.

“We had to move [into our new condo] and I had no strength at all. William had to deal with a lot of unexpected things, even when he didn’t really feel like it. He took on a lot,” said the mother of the young man who, despite the tough times, had to continue working out ahead of last June’s NHL Entry Draft.

If Karine Côté is telling her story today, it is to save lives. “You have to be on the lookout for the smallest things and not be shy about asking for a mammogram. We have to take advantage of today because we don’t know if we will be there tomorrow,” stated the one who lost her father to cancer when she was 30 years old.

For the past few years, Quebec Major Junior Hockey League and National Hockey League teams have been taking part in the Hockey Fights Cancer initiative every November. That’s why, this past November 13, the Sea Dogs organization was honored when Karine accepted to take part in the celebratory puck drop ahead of Saint John’s Pink in the Rink game.

We are honoured to have Karine, a cancer survivor and the mother of William Dufour, join us on November 13 for our Pink in the Rink game.