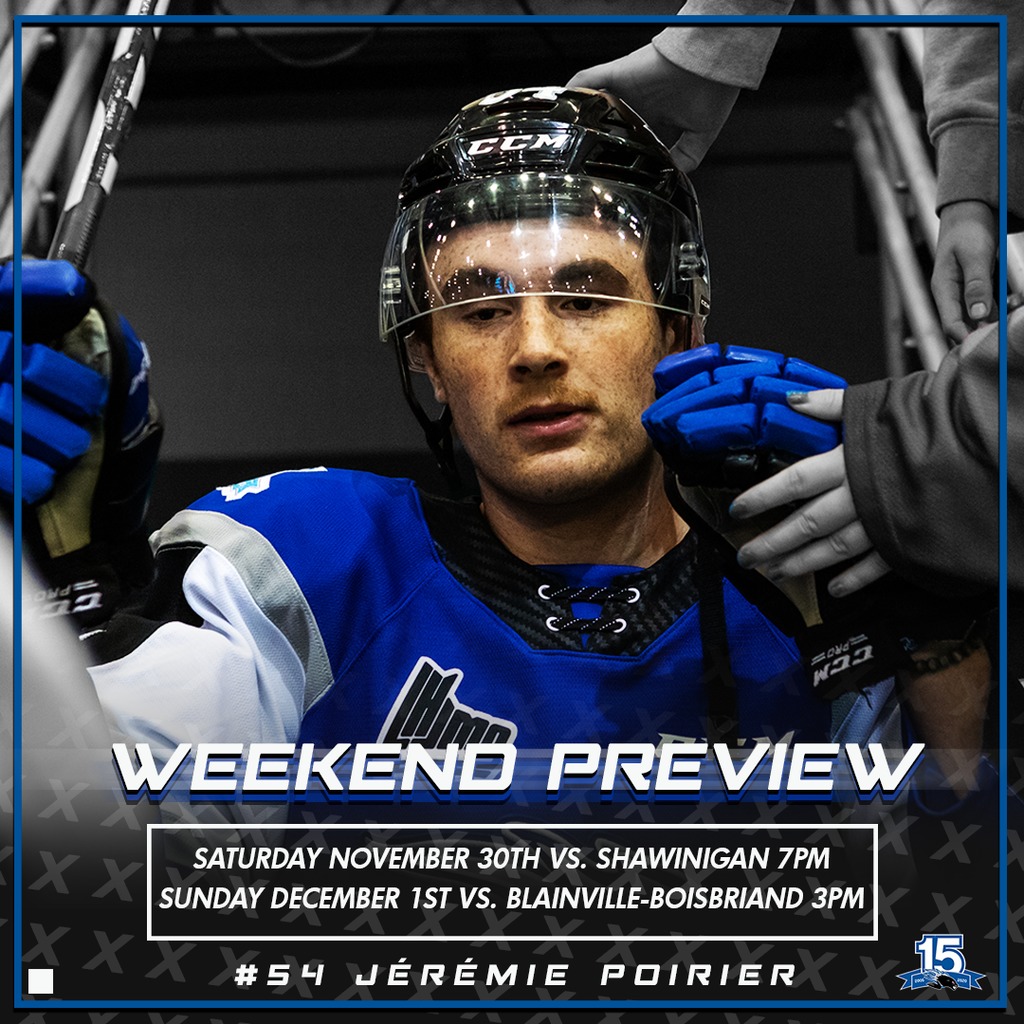 The Saint John Sea Dogs return home for a pair of games this weekend. On Saturday night we take on the Shawinigan Cataractes at 7PM and on Sunday it’s an afternoon tilt with the Blainville-Boisbriand Armada at 3PM. Saint John has won three in a row and are 6-4-0-0 in their last ten games. Tickets for both games can be purchased at the TD Station Box Office and online.

The Shawinigan Cataractes (14-12-0-0) are currently riding a four game win streak after a 4-2 victory over the Cape Breton Eagles on Thursday night to kick-off a three game road swing through the Maritimes. Shawinigan will play Saint John on Saturday before heading to Acadie-Bathurst on Sunday afternoon. The Cataractes are currently in fifth place in the Western Conference with 28 points.

The Cataractes have had no problem scoring this season, they currently have a league’s fifth best 100 goals through 26 games this season. The offence has been led by 17-year-old Mavrik Bourque who has 39 points including 18 goals in 25 games. Bourque was drafted 3rd overall to the Cataractes in the 2018 QMJHL Entry Draft and is eligible for this year’s NHL Entry Draft.

Look for Antoine Coulombe to be the probable starter in net for the Cataractes on Saturday. Coulombe has only allowed seven goals in his last four starts and is tied for the league’s fourth best save percentage with 0.912%.

These two teams met back on November 12th and it was Shawinigan coming out on top, 8-5. Saint John will need to tighten up the defence and penalty kill if they want to end November on a high note. Saint John continues to struggle on the penalty kill and currently has a league’s worst 68.6% success rate. On the contrary, the Sea Dogs power play is the fifth best in the league with 24 goals for for a 22.4% success rate.

“These are two teams we just faced on our Quebec road trip two weeks ago. We played a very strong game in Blainville beating the Armada and got away from our structure and commitment to play a 200 foot game in Shawinigan. Special teams will be key as the Cataractes went 3/3 on their PP while we went 2/3. Defending the rush with commitment from everyone to track back hard into our zone will also be key for success this weekend.”

Saturday night is also the annual Ritchie’s Food Drive in support of Romero House. Fans are encouraged to bring non-perishable food items to the front doors of TD Station prior to the game.

The Blainville-Boisbriand Armada (13-10-1-1) have won four in a row and currently sit fourth in the Western Conference with 28 points. Sunday’s game against Saint John will be the third game in three days for the Armada who are visiting the Maritimes for the first time this season, beginning with stops in Moncton tonight and in Halifax on Saturday.

The Armada and Sea Dogs faced off on November 9th in Blainville-Boisbriand in a game that saw Nicholas Deakin-Poot net a hat trick en route to a 6-2 Sea Dogs win.  Sunday’s match-up will be the only other meeting between the two teams this year, barring a playoff series.

The Armada have been inconsistent in scoring this season, their 82 goals for in 25 games ranks them 13th in the QMJHL. Much of this struggle comes from their league worst 15.4%  power play which has found the back of the opponent’s net only 16 times. This will be an opportune time for the Sea Dogs to improve their penalty kill.

Samuel Bolduc leads the back end for the Armada, he was drafted to the New York Islanders in the second round of the 2019 NHL Entry Draft. The 2000 born defenceman has 14 points. Also drafted from the Armada is forward Luke Henman who was picked by the Carolina Hurricanes in the 4th round of the 2018 NHL Entry Draft.  The Armada will look to both veterans on Sunday afternoon.

Sunday is also the Wawanesa Toy Drive in support of The United Way. Fans are encouraged to bring new and unwrapped toys to the front doors of TD Station prior to the game. Fans who make a donation will be entered to win a trip to the 2020 CHL Memorial Cup Presented by Kia. Contest rules: wawanesa.com/toydrive

Fresh off his 200th point on Saturday night in Acadie-Bathurst, Sea Dogs Captain Nicolas Guay continues to perform offensively. Guay has points in eight of his last 10 games and 14 points in November. The Sherbrooke native now ranks in the top 20 league wide for points and was recently named to the QMJHL Team of the Week for November 18-24th.

The ‘Big Three’ D of the Sea Dogs have cemented their spot atop the stats sheet in the QMJHL. Jérémie Poirier, William Villeneuve and Charlie DesRoches rank second, fourth and sixth respectively in points by a defenceman in the QMJHL. Look for all three to have a strong second half as they push to showcase their skills for the upcoming NHL Entry Draft.